In type 1 diabetes mellitus, interventions that stop or delay decline of β-cell function are desirable.[1,2]       Recent research has focused on the role of the innate immune system in type 1 diabetes. Because of its direct β-cell proapoptotic action and mediatory effects on pancreatic β-cell glucotoxicity, interleukin-1β has been implicated in the pathogenesis of both type 1 and type 2 diabetes. In addition to its effects in the innate immune system, interleukin-1β might be important in the pathogenesis of type 1 diabetes via its role as a potent amplifier of the adaptive immune response. [3-5]
So far, there have been no randomised, placebo-controlled trials of interleukin-1 antagonism in patients with recent-onset type 1 diabetes. Therefore, it was hypothesised that interleukin-1β inhibition in new-onset type 1 diabetes would preserve β-cell function by blocking direct and hyperglycaemia-mediated β-cell toxicity, reducing overall inflammation and favouring regulatory T lymphocyte development and function. To assess this theory, in two trials it was tested whether canakinumab, a human mono clonal anti-interleukin-1 antibody, or anakinra, a human interleukin-1 receptor antagonist, maintained or enhanced β-cell function in recent-onset type 1 diabetes. These studies also assessed the feasibility and safety and tolerability of anti-interleukin-1 treatment.
Two randomised, placebo-controlled trials were performed in two groups of patients with recent-onset type 1 diabetes and mixed-meal-tolerance-test-stimulated C peptide of at least 0.2 nM.
Participants were randomly assigned to subcutaneous injection of either 2 mg/kg (maximum 300 mg) canakinumab or placebo monthly for 12 months or 100 mg anakinra or placebo daily for 9 months. The primary endpoint was baseline-adjusted 2-h area under curve C-peptide response to the mixed meal tolerance test at 12 months (canakinumab trial) and 9 months (anakinra trial). 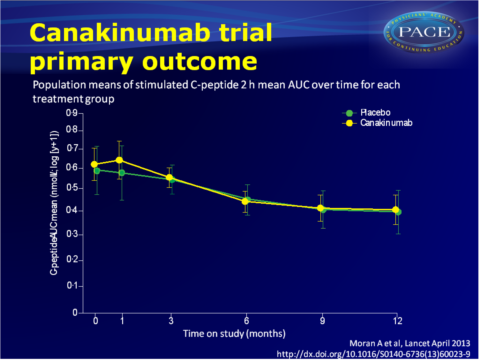 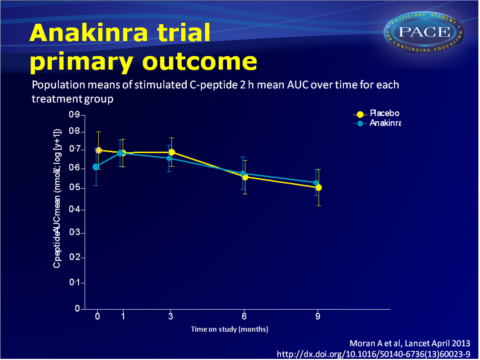