Choline is involved in lipid metabolism and cell membrane structure, and is a precursor of the neurotransmitter acetylcholine, among other functions. The phospholipid phosphatidylcholine (lecithin) is the major dietary source of choline [1,2].
The authors recently described the potential role of a phosphatidylcholine-choline metabolic pathway involving gut microbiota in atherogenesis in animal models [3]. Furthermore, they found an association between a history of cardiovascular disease (CVD) and elevated fasting plasma levels of TMAO (trimethylamine-N-oxide), which is an intestinal microbiota-dependent metabolite of choline [3-8].
The current study explored the relationship between oral intake of phosphatidylcholine and the involvement of the intestinal microbial organisms in TMAO production in humans. Furthermore, fasting TMAO plasma levels were related to long-term risk of incident major adverse events (MACE).
In the first study, 40 healthy adults were subjected to a dietary phosphatidylcholine challenge at the start of the study. They subsequently took broad-spectrum antibiotics for one week, after which the phosphatidylcholine challenge was repeated, as well as a final time >1 month after antibiotics withdrawal. In a clinical outcomes study, 4007 adults who underwent elective diagnostic cardiac catheterization were enrolled and followed for 3 years. Participants had no evidence of acute coronary syndrome (ACS).

This study provides evidence for the generation of the proatherogenic metabolite TMAO from dietary phosphatidylcholine, and the involvement of intestinal microbiota therein. Fasting plasma TMAO levels predict the risk of incident MACE, independently of traditional cardiovascular risk factors, even in low-risk cohorts. Modulating intestinal microbiota could prove interesting for therapeutic purposes in relation to the TMAO pathway.

This study describes a biochemical pathway that links the host metabolism and its microbial residents in the gut, to atherogenesis. These observations point to a truly novel and potentially modifiable risk factor for atherothrombotic vascular disease. However, much remains unknown about the multiple biochemical actions of TMAO. Therefore, the precise role of TMAO in atherothrombogenesis needs to be specified, whether it has a direct effect on pathogenesis, is an epiphenomenal biomarker, or is a precursor to a more direct effector. 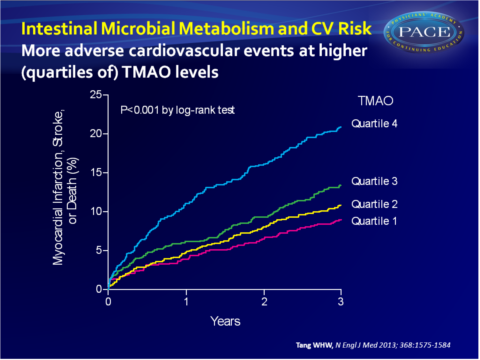