Non-steroidal anti-inflammatory drugs (NSAIDs) are widely used, mainly to treat pain. Their long-term use is limited by serious gastrointestinal side-effects. Since the analgesic and antiinflammatory effects of NSAIDs are mediated by inhibition of COX-2, and their gastrointestinal side effects mostly by inhibition of COX-1, NSAIDs which selectively inhibit COX-2 might reduce the risk of gastrointestinal toxicity compared with other NSAIDs. Trials comparing coxibs (COX-2 selective drugs) versus traditional NSAIDs (tNSAIDS) seemed to confirm that coxibs at doses with similar analgesic efficacy had less gastrointestinal toxicity.[1,2] Subsequent placebo-controlled trials also showed unequivocally that coxibs were associated with an increased risk of atherothrombotic vascular events.[3,4] A meta-analysis of randomised trials comparing a coxib versus placebo or a coxib versus tNSAID indicated that some tNSAIDs might also have adverse effects on atherothrombotic events, but that these hazards might depend on the degree and duration of suppression of platelet COX-1.[5] Naproxen did not seem to increase the risk of atherothrombosis, but other high-dose tNSAID regimens with only transient effects on platelet COX-1 were associated with a small, but definite, vascular hazard. The US Food and Drug Administration requires that the summaries of product characteristics of all NSAIDs carry a boxed warning about the risks of cardiovascular disease [6], whereas the European Medicines Agency’s Committee for Medicinal Products for Human Use (CHMP) decided that coxibs (but not tNSAIDs [7]) should be contraindicated
in patients with coronary heart disease or stroke, and used with caution in patients with risk factors for coronary heart disease.[8] Randomised trials could provide better estimates of the cardiovascular hazards of NSAID regimens than observational studies. This study aimed to provide such information
through meta-analyses of 280 randomised trials of NSAIDs vs placebo (124 513 participants, 68 342 person years) and 474 trials of one NSAID versus another NSAID (229 296 participants, 165 456 person-years). The main objective was to characterise and quantify the cardiovascular and gastrointestinal risks of particular NSAID regimens among different types of patients, particularly those at increased risk of vascular disease. 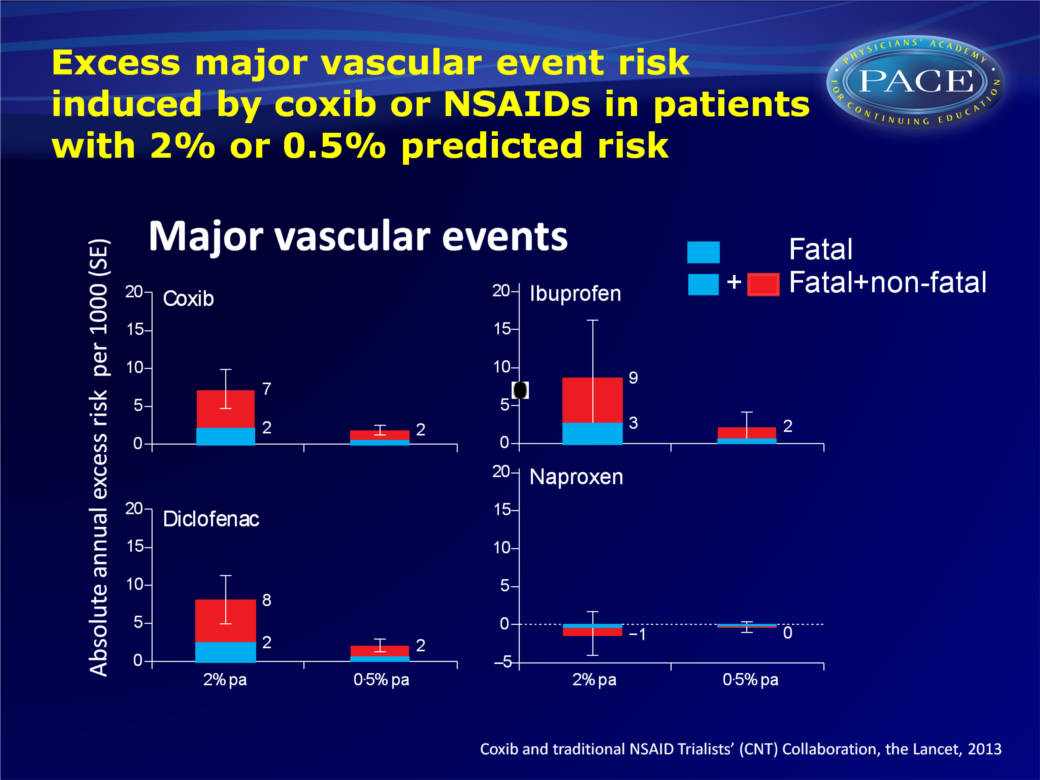 Whilst NSAIDs increase vascular and gastrointestinal risks to a varying extent,  the effects of different regimens in particular patients can be predicted, which may guide physicians to choose between alternative NSAID regimens to weigh up which type of NSAID is safest in different patients.

Long-term use of high- dose NSAIDs should be reserved for those who receive considerable symptomatic benefit from the treatment and understand the risks.