Edoxaban is an oral anticoagulant due to its inhibiting effect on Factor Xa. The effect is more selective than that of warfarin, and it is more convenient due to its rapid effect (peak after 1-2 hours, half-time is ~10-14 hours) and because of its linear pharmacokinetics. In a phase II study (1146 patients) the bleedings on edoxaban appeared dose-related and lower at a regime of once instead of twice daily.
The Effective aNticoaGulation with factor xA next GEneration in Atrial Fibrillation (ENGAGE AF)-TIMI 48 trial is a randomised, doubleblind, placebocontrolled study that included more than 21000 patients with atrium fibrillation from 46 countries (1400 hospitals). The patients had a moderate to high risk (CHADS2>2). Patients were randomised (1:1:1) to high dose edoxaban (daily 60 mg), low dose edoxaban (daily 30 mg) or warfarin (target INR: 2.0-3.0). The randomisation was stratified by CHADS2 score 2-3 vs. 4-6 and the need for edoxaban dose reduction. Guided by renal function, body weight and use of strong P-gp inhibitors, dose of edoxaban was adjusted if needed from 60 to 30 mg, or from 30 to 15 mg. The primary efficacy endpoint was stroke or systemic embolic event (SEE). The secondary efficacy endpoint was stroke, or SEE or CV mortality. The primary safety endpoint was major bleedings according to ISTH criteria. 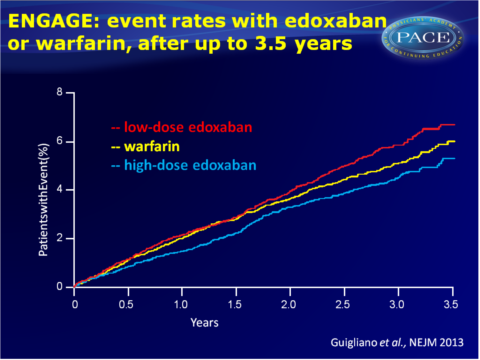 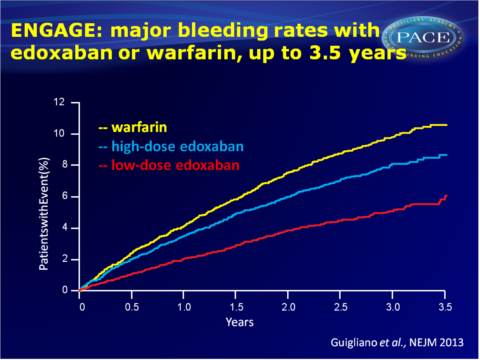 In comparison  to well-controlled warfarin treatment (TTR: 68.4%) edoxaban once daily is non-inferior in the prevention of stroke/SEE (both doses), and the high dose edoxaban showed a trend towards fewer strokes and SEE during treatment.
Both doses gave a significant reduction in the risk of major bleedings, intracranial bleedings, haemorrhagic stroke and CV mortality.
Thus, the net clinical outcomes of edoxaban appear superior to warfarin, and edoxaban once daily seems to be a good and safe alternative for warfarin.

Disclaimer
This report is of the AHA congress 2013 is based on the information provided by the AHA during press conferences and on the website.

Dr. Bob Giugliano, discusses the results and implications of the recently published ENGAGE trial which evaluated edoxaban, the most recent Factor Xa inhibitor.