The relation between heart failure (HF) and memory disorders remains controversial [1-5], although both conditions primarily affect the elderly.
The Evaluation of risk Factors for cognitive Impairment in Chronic Ambulatory heart failuRe in the Elderly (EFICARE) study aims to assess the usability of the Memory Impairment Screen (MIS) test by cardiologists. The prevalence and determinants of memory impairment is assessed in a large ambulatory population of subjects >70 years old with symptomatic HF in France. Furthermore, this study aims to compare the cardiologist’s clinical global impression with use MIS for screening of memory disorders. Cardiologists were first asked to rate their patient’s cognitive function as normal or impaired, before they would do a delayed-recall MIS (MIS-D). Maximum score in MIS-D is 8, <6 means impaired memory function and <4 implies severe impairment. 912 subjects were included. 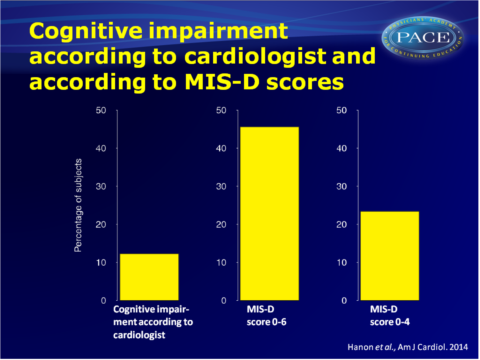