Dipeptidyl peptidase-4 (DPP-4) inhibitors reduce the degradation of the incretin hormone glucagon-like peptide-1 (GLP-1), which leads to increased insulin secretion, suppression of glucagon release, and a lower hepatic production of glucose and higher peripheral glucose uptake and metabolism. The pancreatic effects depend on the glucose concentration, which reduces the risk of hypoglycaemia. They were found to be safe and well-tolerated in clinical studies [1].
Modulation of GLP-1 may influence cardiovascular (CV) risk. To date, only one study has investigated the cardioprotective effects of DPP-4 inhibition in humans, which found an acute improvement in myocardial performance during dobutamine stress in non-diabetic patients with coronary artery disease (CAD) after a single dose of sitagliptin and an oral glucose load [2].
This study aimed to determine if patients with type 2 diabetes mellitus (T2DM) will also benefit from these favourable CV effects. To this extent, 19 patients with T2DM and CAD received DPP-4 inhibition with sitagliptin for about four weeks, and left ventricular (LV) function and myocardial response to demand in dobutamine stress echocardiography (DSE) was evaluated. 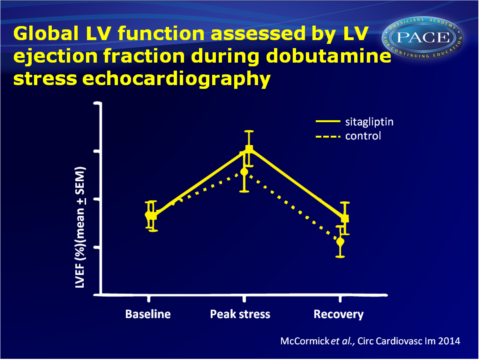 This pilot study suggests that addition of DPP-4 inhibitor therapy with sitagliptin to regular treatment of patients with T2DM and CAD can give improvement of both global and regional LV performance during dobutamine stress and a reduction in post-ischaemic stunning. Ischemic regional wall segments benefitted most from the cardioprotective effects.
These cardioprotective effects of sitagliptin treatment in diabetic patients need to be confirmed in large, prospective, randomised studies, and clinical endpoints need to be also evaluated.