Treatment effect of rivaroxaban vs. warfarin not affected by cTTR

Relationship between time in therapeutic range and comparative treatment effect of rivaroxaban and warfarin: results from the ROCKET AF trial

International normalised ratio (INR) is a measure of the degree of anticoagulation when vitamin K antagonists (VKAs) are used. An INR of between 2.0 and 3.0 is generally recommended to limit both the risk of stroke and bleeding [1,2]. Time in therapeutic range (TTR) of INR is considered a measure of quality of VKA anticoagulation in patients with atrium fibrillation (AF).
A direct relationship has been shown between TTR and lower rates of stroke and systemic embolism (SE) in AF patients. The relationship between TTR and bleeding risk appears more variable [3,4].
The ROCKET-AF trial directly compared warfarin treatment with the novel factor Xa inhibitor rivaroxaban in a blinded, randomised fashion in high-risk population [5].
The relationships among TTR, outcomes and treatment effect cannot be directly assessed at the individual level, since individual TTR is not meaningful in patients treated with rivaroxaban. This pre-specified analysis of the ROCKET-AF trial compares treatment effects of rivaroxaban vs. warfarin stratified by centre TTR (cTTR), thus still benefitting from randomisation. This type of analysis only allows indirect inference about the effect of individual TTR. 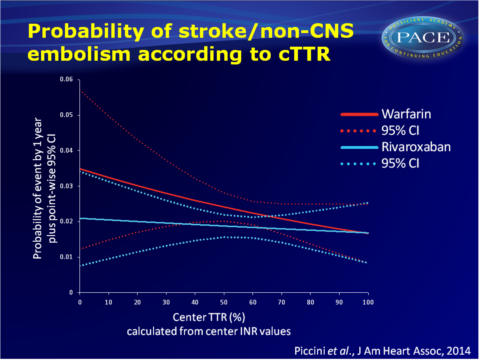 TTR correlated negatively with risk of stroke and SE, and positively with risk of bleeding in the ROCKET-AF trial. It should be noted that centres with higher cTTR had patients with different comorbidity profiles, including lower-risk patients.
Despite the fact that a wide range of TTR levels were observed across centres, no evidence was seen that the relative efficacy of rivaroxaban vs. warfarin varied with cTTR. Thus, while TTR is an important and validated quality measure for VKA management, it does not impact the estimate of the treatment effect of rivaroxaban vs. warfarin for the prevention of stroke and SE.