HF with recovered ejection fraction has better, but not normal, prognosis than HF-PEF and HF-REF

The primary goal of therapy in heart failure (HF) with reduced ejection fraction (HF-REF) is recovery of left ventricular (LV) function. Little is known about the natural history, prognosis, and need for continued long-term therapies in patients in the case of recovery of LV function [1-4]. Some of the patients with HF and recovered ejection fraction (HR-Recovered) may continue HF-REF treatment, while others may discontinue therapy, or be wrongly classified as having HF with preserved ejection fraction (HF-PEF) [5].
Reverse remodelling or myocardial remission, towards better EF, in response to therapy may result in a milder HF phenotype and a better prognosis [6].
This study aimed to characterize the HF-Recovered population, and compare these patients with those with HF-REF and HF-PEF. Data of 1821 patients of the Penn Heart Failure Study cohort were used, of whom 1523 had HF-REF (mean EF: 27%), 122 had HF-PEF (mean EF: 62%) and 176 patients had HF-Recovered (mean EF: 57%). Patients were followed up for a median of 3.6 years, with a maximum of 8.9 years. 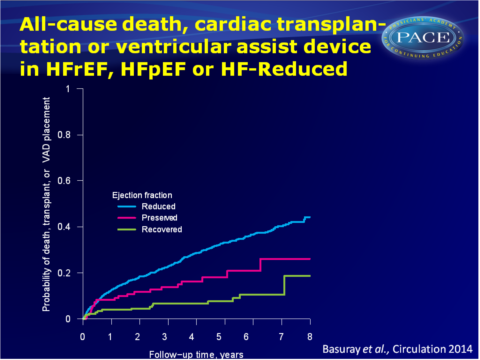 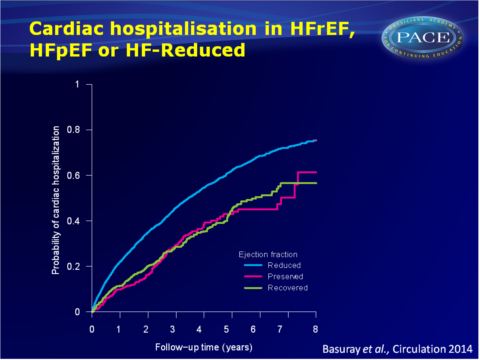 These data suggest that HF-Recovered represents a distinct phenotype on the HF continuum, since this population has different demographics, comorbidities and symptom severity from HF-REF and HF-PEF populations. HF-Recovered patients may have abnormal BNP, uric acid, ST2, SFlt-1 and detectable troponin I, suggestive of persistent neurohormonal activation, increased oxidative stress and cardiomyocyte injury and stress, despite recovery of EF. Although HF-Recovered patients had the best prognosis with regard to death, cardiac transplantation and VAD placement, it is not at all a normal prognosis, as HF symptoms and clinical events continue to occur. Thus, recovery of EF does not necessarily mean recovery of HF. Further pathophysiological characterisation should help to better tailor therapy in these patients.

This study provides valuable characterisation of the population in whom LV EF has improved to >0.50. These patients should indeed not be classified as HF-PEF, and initiation or investigation of therapies intended for HF with low EF should be discouraged without confirmation that EF remains low.
Despite EF>0.50, convincing clinical and biochemical evidence was presented that heart dysfunction has not truly recovered in these patients. It is proposed to call this condition HF better EF. Further characterisation of these patients will reveal how many patients have multiple abnormalities and whether patients exist who have entirely normalised profiles. The population with HF and low, improving EF has been recognised as a distinct population in the last American College of Cardiology Foundation/American Heart Association guidelines [8].” The delineation of HF better EF is 1 example of an important new diagnosis arising and defined from our recent therapies. Collaborative clinical and molecular scrutiny of this modern population will catalyze new insight into fundamental questions of how HF recompensates and what can truly recover, and ultimately help us to support and sustain recovery for patients with HF.”