Presented at the ESC Congress 2014 by: Milton PACKER (Dallas, US)

The PARADIGM-HF study investigated the experimental agent LCZ696 in patients with chronic heart failure with reduced ejection fraction (HFrEF). LCZ696 is a first-in-class angiotensin receptor–neprilysin inhibitor (ARNI). The agent is an angiotensin receptor blocker chemically bound to a neprilysin inhibitor, which separate when entering the body, to each do their job. It has different mechanisms of action on the neurohormonal system of the heart, such that it not only reduces the strain on the heart, but also promotes recovery of the heart muscle.
The PARADIGM-HF trial was a randomised, double-blind, phase III outcome study that compared the efficacy and safety of LCZ696 (pill) twice daily with enalapril, in almost 8500 patients with HFrEF. The study was designed specifically to test if LCZ696 can replace the use of ACE inhibitors, in addition to other recommended treatments. The primary endpoint was a composite of time to first occurrence of either CV mortality or hospitalisation for HF. The PARADIGM-HF study was stopped early (after a median follow-up of 27 months), when the composite endpoint was met in an interim analysis. 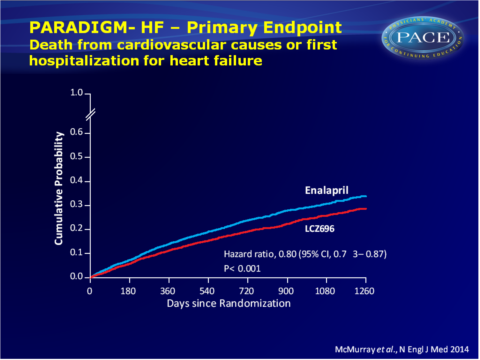 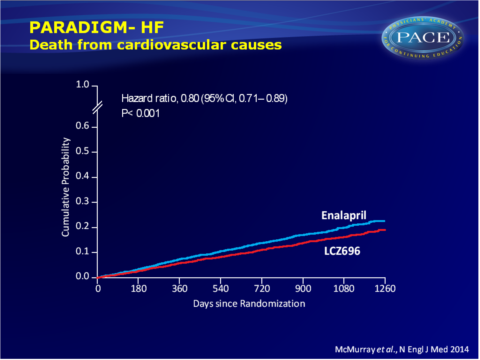 As expected based on the early termination of the study, the results of LCZ696 are very positive as compared to the current cornerstone therapy of chronic heart failure with ACE-inhibitors. While ACE inhibitors reduce CV mortality by 18%, LCZ696 adds another 20% to this. Dr. Packer went as far as to conclude that LCZ696 should replace current use of ACE inhibitors and angiotensin receptor blockers in the management of chronic heart failure.
In the discussion after the presentation in the press conference the question whether subgroups exist that may not benefit from this ARNI was asked. The observed effect was incredibly consistent across all subgroups. No subgroup could be identified that did not benefit. African-Americans did not form an exception to this.
Dr. Packer believes that the ARNI positively affects the rate of progression of HF, and that it can reduce hospitalisations. He is convinced that LCZ669 changes the natural history of HF. When asked whether they agree with dr. Packer, the members of the discussion panel answer that the presented results are striking and robust. Although they want to read the full paper, they are excited about these long awaited results. A member says to be in favour of a Fast Track designation for approval.

The article by McMurray et al., was published today in NEJM.