Iron is very important for normal functioning and survival of organisms. Iron deficiency is a frequent comorbidity in patients with heart failure (HF) and in patients admitted to hospital for worsening HF. HF complicated by iron deficiency is associated with reduced functional capacity, poor quality of life and increased mortality, independent of anemia. Correcting iron deficiency is an attractive therapeutic target in HF.
The CONFIRM-HF study (Ferric CarboxymaltOse evaluatioN on perFormance in patients with IRon deficiency in coMbination with chronic Heart Failure) is a randomized, double-blind, controlled, phase 4 study evaluating the efficacy and safety of intravenous iron carboxymaltose (FCM) compared with placebo in 304 patients with chronic heart failure and iron deficiency (serum ferritin <100 ng/ml, or between 100 and 300 ng/mL as transferrin saturation <20%). The purpose of this study is to measure the effect of iron suppletion on the  exercise capacity of this group of patients. The difference between the 6-minute walk test at baseline and at week 24 was the primary endpoint. 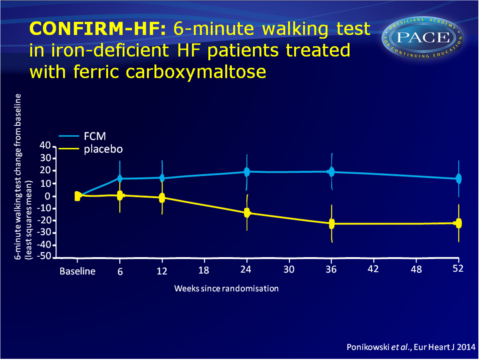 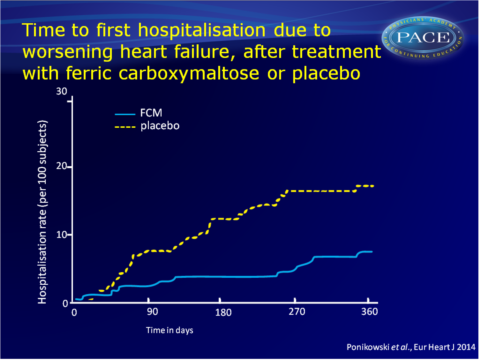 In symptomatic patients with chronic heart failure and iron deficiency, treatment with iron-carboxymaltose during a year resulted in ongoing improvements in functional capacity, symptoms and quality of life. Possibly this treatment also reduces the risk of recurrent admission for worsening HF.
During the press conference, Dr. Ponikowski already wondered whether this improvement in 6-minute walk test is a clinically relevant improvement. He answered this question by stating that this kind of improvements were up to now only seen with cardiac resynchronization therapy. In addition, patients themselves indicate that they feel better, and NYHA class and quality of life improved.
Dr. Ponikowski emphasized that iron deficiency is an unsung comorbidity; it is not monitored well enough, although this is recommended in the ESC guideline. This trial shows that iron deficiency is a significant co-morbidity, which can be easily detected. Treatment can easily yield an improvement of functional capacity and probably even outcomes.

This data was published in Eur H Journal on August 31.