Statins appear renoprotective in subjects with CVD, with or without chronic kidney disease

To reduce the cardiovascular disease (CVD) risk associated with chronic kidney disease (CKD) and to prevent progressive impairment of renal function, aggressive treatment of comorbid conditions is recommended [1-3]. It has been shown that higher LDL-c levels are associated with a more rapid decrease in estimated glomerular filtration rate (eGFR) [4,5] and lowering LDL-c with statins may be renoprotective in subjects with CVD [6,7]. Several trials have shown improvements in eGFR with statin treatment, both in subjects with or without CKD [8-12].
In the Stroke Prevention by Aggressive Reduction in Cholesterol Levels (SPARCL) trial, patients with recent noncardioembolic stroke or transient ischaemic attack (TIA) without known coronary heart disease (CHD) were randomised to atorvastatin 80 mg/d or placebo. Treatment was associated with lower stroke risk and major coronary events [13]. This paper describes a post hoc analysis of SPARCL data that explored the effect of atorvastatin 80 mg/d vs. placebo on changes in renal function from baseline (eGFR) in those with (n=1600) and without (eGFR >60 mL/min per 1.73m2, n=3119) CKD at baseline. Subjects with CKD had a baseline eGFR of 52.3±7.0 mL/min per 1.73 m2 compared with an eGFR of 72.3±8.9 mL/min per 1.73 m2 in those without CKD (P<0.001). 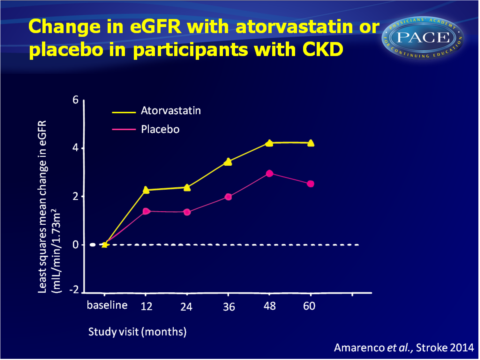 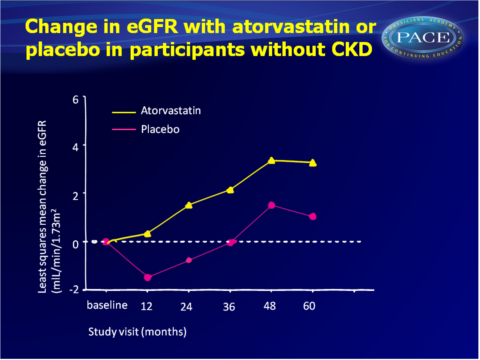 This posthoc analysis suggests that treatment with atorvastatin 80 mg/d improves eGFR as compared with placebo, in a population of subjects with prior stroke or TIA. The decline in renal function seen in subjects who had diabetes at baseline, was largely halted in subjects randomised to atorvastatin. The renoprotective effects of atorvastatin 80 mg/d were seen within 1 year, and maintained for 60 months, and were seen in patient with and without CKD at baseline.