The contribution of the gastrointestinal system to the pathogenesis of heart failure (HF) is increasingly appreciated [1,2]. A well-balanced intestinal microbial community normally maintains intestinal barrier function, along with mucosal immunity and normal sodium and water homeostasis. In HF and associated splanchnic circulation congestion, altered intestinal barrier function, bacterial overgrowth and impaired host defence can disturb the bacterial environment. Ultimately this may contribute to systemic inflammation [3,4]. Progressive venous congestion in some patients may further complicate abdominal congestion, including negatively affecting drug absorption and pharmacokinetics [5,6], and renal glomerular and tubular dysfunction due to increased intra-abdominal pressure [7,8].
A mechanistic link has previously been described between intestinal microbe-dependent generation of trimethylamine-N-oxide (TMAO) and increased risk for future cardiovascular events, via a pathway involving dietary nutrients such as phosphatidylcholine, choline (found in eggs) and carnitine (found in red meat) [9-11]. The authors investigated the relationship between fasting plasma TMAO levels and long-term (5 years) clinical prognosis in patients with stable HF. 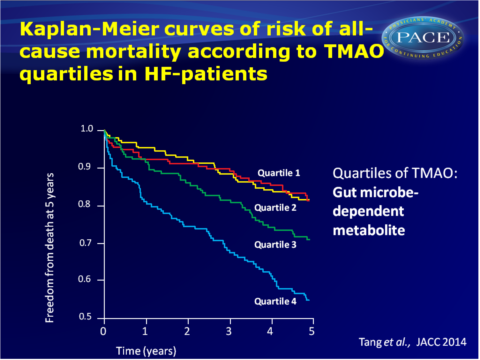 This study shows that plasma TMAO has a strong prognostic value in patients with stable HF, in addition to traditional risk factors, cardiorenal indexes (BNP and eGFR) and a marker of systemic inflammation (hsCRP). These observations further define the ‘gut hypothesis’, in that gut microbiota affect prognosis in patients with HF. Studies are warranted that explore whether targeted interventions to alter the gut microbiota composition can lower TMAO levels and limit disease progression in HF.

“The strong correlation between TMAO concentration and kidney function raises the following question: given the importance of the kidney in eliminating TMAO, is higher TMAO level just a marker
of renal impairment? Other questions arise—for example, what is the role of comorbidities, such as diabetes, in elevating TMAO levels? Diabetes was considerably more common in the higher TMAO group, and metformin has been reported to increase TMAO levels (and intestinal microbiota have been postulated to play a role in the development of diabetes). More puzzling is just how TMAO by itself might relate to prognosis. It is probably unlikely that a proatherogenic mechanism could account for an increase in mortality in such a short time frame, especially in patients with nonobstructive coronary disease. (…) Clearly, this is only the beginning of the story of TMAO in HF
but one for which we should look forward to further instalments.”