Observational studies have suggested that high on-treatment platelet reactivity (HPR) to adenosine diphosphate (ADP) is a strong independent risk factor for ischaemic events in patients given dual antiplatelet therapy (DAPT) after percutaneous coronary intervention (PCI) [1-3].
It is as yet unclear and topic of debate whether HPR is a marker of higher risk, or a modifiable risk factor [2]. Studies to date evaluating personalised antiplatelet therapy to aiming to overcome HPR have yielded conflicting results, and methodological limitations may have masked the value of this strategy [1,4].
HPR to acetylic salicylic acid (ASA) is less well studied. ADAPT-DES registry data showed no difference in response to ASA, as measured with the VerifyNow assay, between patients with and without stent thrombos (ST) [3]. Other data suggests, however, that dual HPR to ADP-induced and arachidonic acid-induced (AA: reflecting response to ASA) aggregation predisposes patients to a higher ischaemic risk than single HPR. Multiple electrode aggregometry (MEA) can effectively assess the risk of HPR to ADP after PCI [5].
This tertiary care single centre registry was used to evaluate the impact of individualising DAPT with MEA in an all-comers population, including STEMI patients, by peri-interventional treatment of HPR to ADP and AA. Outcomes were compared between a group that did not have HPR after clopidogrel loading (non-HPR), and the individualised group (ADP receptor blocker reloading and primary prasugrel or ticagrelor loading, based on a logarithm). 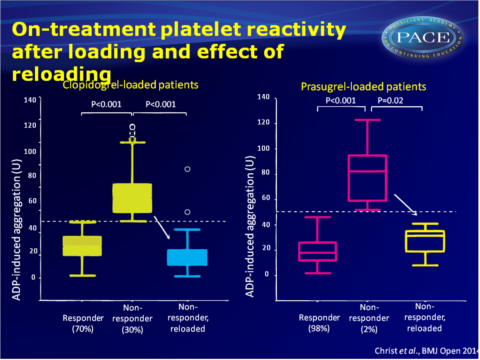 This study provides real-world evidence that routine efficient peri-interventional individualisation of DAPT with MEA, and use of newer generations of ADP receptor blockers, can minimise early ischaemic events after PCI in an all-comers population including STEMI patients. Intensifying platelet inhibition in patients with HPR did not increase bleeding complications, as compared with patients without HPR under DAPT. ADP-dependent and ASA-dependent platelet activation may act synergistically. These data therefore suggest that HPR is a modifiable risk factor to which treatment in PCI patients can be tailored.