Despite statin and other lipid-lowering treatments, many people still have high LDL-c levels, and remain at high residual risk of cardiovascular events. Thus, efforts are directed at the development of novel drugs that provide additional lowering of LDL-c, when co-administered with a statin.
One of the LDL-lowering strategies being explored is inhibition of cholesteryl ester transfer protein (CETP), since it transfers cholesterol into atherogenic LDL particles [1]. Although initial human clinical studies did not show a cardioprotective effect of CETP inhibition with torcetrapib and dalcetrapib, the hypothesised beneficial effect of CETP lowering is currently being studied in two large clinical outcome trials, namely REVEAL and ACCELERATE. These trials evaluate CETP inhibitors that do not have the adverse off-target effects seen with torcetrapib.
TA-8995 is a novel CETP inhibitor that exerted potent effects on both pro-atherogenic and anti-atherogenic lipoprotein particles in a phase 1 study [2], without the off-target effects of torcetrapib. This randomised double-blind phase 2 12-week study assessed the safety and efficacy of TA-8995 as monotherapy or in combination with statins in 364 patients with mild dyslipidaemia (fasting LDL-c: 2.5-4.5 mmol/L, HDL-c: 0.8-1.8 mmol/L and triglyceride<4.5 mmol/L after run-in or wash-out of previous lipid-lowering treatments). Different doses of TA-8995 and combinations with statins were evaluated. 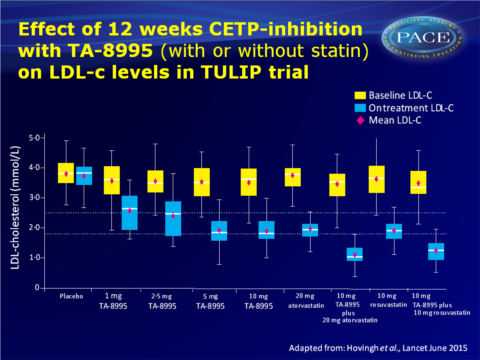 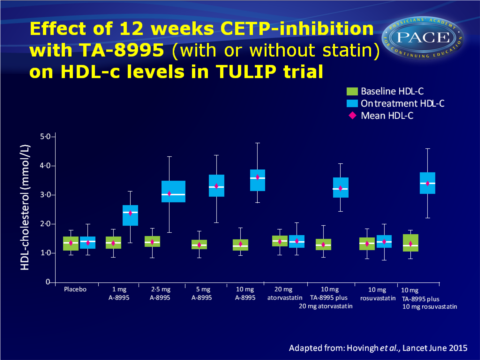 Treatment with the new, potent CETP-inhibitor TA-8995 lowered LDL-c (~45%) and apoB (~33%) levels, while increasing HDL-c (up to ~179%) and apoA-1 (up to ~63%) concentrations. When combined with statins, TA-8995 yielded an additional decrease of LDL-c of up to 50%.
Although CETP-inhibitors were initially developed to raise HDL-c levels, TA-8995 potently lowers levels of atherogenic lipoproteins. The increase of plasma apoA-I concentrations and the ability to promote cholesterol efflux may represent additional benefits. The translation of the antiatherogenic effects of TA-8995 into a reduction of future CV events has to be tested in an outcome trial.

Previous studies with CETP inhibitors torcetrapib and dalcetrapib suggested “that CETP inhibition can be safe but that, in the absence of LDL cholesterol reduction, increasing cholesterol efflux by about 9% will not translate into reductions in cardiovascular disease.” Currently, evacetrapib and anacetrapib are being evaluated in two CV outcome studies. “Unlike dalcetrapib, both compounds increase ABCA1-mediated efflux from generation of lipid-poor prebeta HDL, and decrease lipoprotein(a). “Provided that current trials are sufficiently powered and no harmful effects emerge, then these treatments, by virtue of their LDL cholesterol-lowering potential alone, should reduce cardiovascular disease at least as favourably as ezetimibe in the IMPROVE-IT trial.”
The TULIP investigators report that “TA-8995 inhibited CETP activity in a dose-dependent manner, and that this results in both a decrease in LDL cholesterol and an increase in HDL cholesterol, both as monotherapy and against a background of moderate intensity statin treatment.” (…) “The magnitude of the reduction in LDL cholesterol and lipoprotein(a) achieved by TA-8995 means that this oral compound is comparable with the potent subcutaneous PCSK9 inhibitors.”