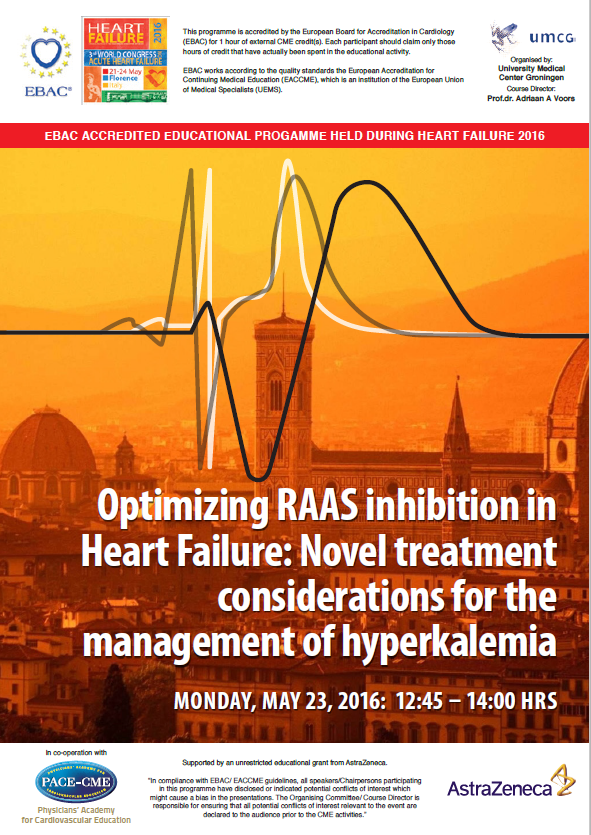 The educational objectives of this symposium were:

Many HF patients are treated suboptimally, with hyperkalemia being one of the underlying reasons. Prof Faiez Zannad, Nancy, France, considers this clinical scenario, its consequences and how it can be managed.

The future of HF management: How does potassium binding fit within pharmacological treatment of heart failure?

Prof. Kenneth Dickstein considers the increase in potassium levels that arise as a consequence of blocking the renin-angiotensin system. Hyperkalemia is often a reason for not following guideline-recommended therapy, which underlines the need for novel potassium-lowering therapy.

This symposium was supported by an unrestricted educational grant from AstraZeneca.

In compliance with EBAC/ EACCME guidelines, all speakers/Chairpersons participating in this programme have disclosed or indicated potential conflicts of interest which might cause a bias in the presentations.

Other news from ESC Heart Failure 2016

ESC HF 2016 Data from the UK based CALIBER programme reveal that risk factors include older age, socioeconomic deprivation, and diabetes.

ESC HF 2016 Subgroup analysis of ATMOSPHERE fails to show a benefit of aliskiren as compared with enalapril in HF patients with diabetes. Combination therapy is associated with excess adverse events.

Exercise associated with longer life in patients with heart failure

ESC HF 2016 At the presentation of the new ESC Heart Failure Guidelines, Professor Ponikowski, Chairperson of the guidelines Task Force, summarised the guidelines as ten commandments.

ESC HF 2016 A new ESC HF guideline was presented at the ESC Heart Failure Congress in Florence, and includes a new definition of HF, and updated treatment algorithms for chronic and acute HF.