Magnitude of importance of risk factors for stroke varies between populations

Phase I of the INTERSTROKE study (n=6000, 22 countries) identified 10 potential modifiable risk factors that were associated with 90% of the population attributable risk (PAR) of acute ischemic stroke and intracerebral haemorrhage (1). However, the population was too small to reliably describe regional variations in the effect of risk factors, as well as within key populations or within stroke pathological subtypes. Nevertheless, it is important to know whether stroke prevention differs by region or population characteristics. Furthermore, variation between groups my explain the worldwide variation in stroke incidence and subtypes observed (2). 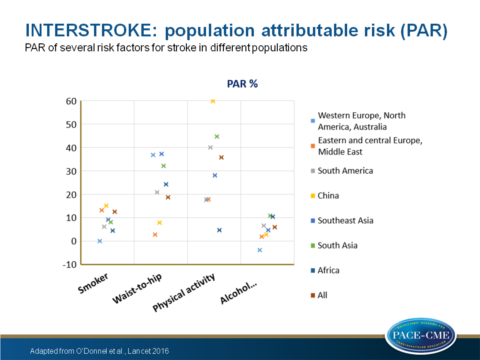 Despite differences in the magnitude of importance regarding risk factors between ethnic variations, men and women and age-related subgroups, the collective contribution of the ten risk factors for stroke risk was consistent in all populations (PAR ~90% for stroke). This means that general approaches for stroke prevention can be similar worldwide, but population-specific refinement of programmes might be needed.

The associated editorial comment of Feigin strengthens the importance of the findings by O’Donnel et al.. Feigin mentions three key messages that can be drawn from the study: 1. Stroke is a highly preventable disease regardless of age and sex, 2. The relative importance of modifiable risk factors and their PAR strengthens the need for development of regional or ethnic-specific prevention programmes, 3. Additional research for risk factors is needed for countries and ethnic groups that have not been included in this analysis, as well as definite cost-effectiveness research on primary stroke prevention in key populations. ‘The key issues now are how best to implement primary prevention strategies in practice and how to decide who will provide funding for the development and implementation of integrative preventative programmes as well as research on primary prevention.’