Recent heart failure (HF) guidelines emphasize the importance of the immediate diagnosis and treatment of patients presenting with acute HF (AHF) in the emergency department (ED). This is based on retrospective data showing that the efficacy of any intervention/treatment may be time-dependent in this setting [1-5].

In current analysis of the multi-center REALITY-AHF registry, the association between time to treatment and clinical outcomes was prospectively evaluated in patients with AHF presenting at the ED. In this way the prognostic impact of time to treatment for AHF performed in the acute phase was determined.

The AHF diagnosis was based on the Framingham criteria. The following patients were excluded: patients who received IV treatment before their arrival at the ED, those with a previous heart transplantation, or on chronic peritoneal dialysis or hemodialysis, or with acute myocarditis, or ACS requiring PCI, as well as patients without BNP or NT-proBNP data or with a BNP level <100 pg/ml or a NT-proBNP level <300 pg/ml at baseline.

The primary pre-specified variable was the door-to-furosemide (D2F) time, defined as the time from ED arrival to the “first IV furosemide” administration. Patients were divided into the early and the non-early treatment groups, using a cutoff of 60 minutes. The primary endpoint was all-cause in-hospital mortality.

In a prospective observational study, patients with AHF presenting at the ED with severe congestive symptoms were more likely to be treated early with IV furosemide, and treatment with IV furosemide within 60 min was independently associated with a better in-hospital survival. 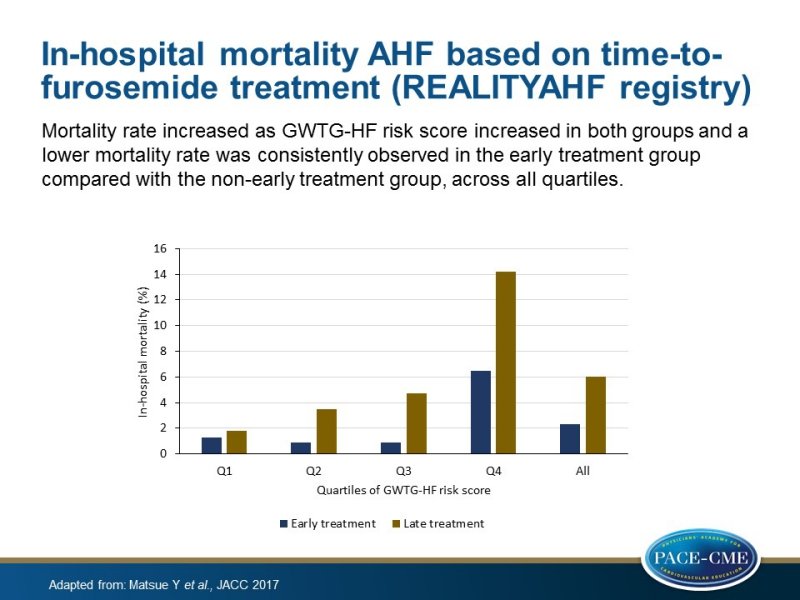