Presented at the ESC congress 2017 by: Martin Landray (Oxford, UK)

Clinical trials with cholesteryl ester transfer protein (CETP) inhibitors, which increase HDL-c, have not shown a CV benefit to date. These included trials with torcetrapib (unexpectedly high cardiovascular mortality), dalcetrapib or evacetrapib (lack of efficacy). Anacetrapib is a new CETP inhibitor that was evaluated in the REVEAL study. This study included many more patients and had a longer follow-up than earlier published studies evaluating CETP inhibitors. 30449 patients of at least 50 years old with vascular disease and total cholesterol levels of <155 mg/dL (<4.0 mmol/L) participated in the REVEAL study and received 100 mg anacetrapib or placebo daily, on top of atorvastatine (20 or 80 mg daily).

Treatment with the CETP inhibitor anacetrapib on top of statin therapy resulted in a significant reduction of serious coronary events compared with placebo, in high-risk patients with vascular disease. A small reduction in the number of persons with new onset DM was seen. Anacetrapib was well tolerated, without an excess of symptomatic complications or serious side-effects, considering absence of an excess of symptomatic complications and serious side-effects. A post-trial follow-up is planned in which patients will be followed for two extra years, while not taking anacetrapib anymore, to assess the efficacy and safety of anacetrapib in the long run.

During the press conference it was noted that the Kaplan-Meier curves diverged only after 2 years. Landray noted that this is comparable to other lipid-lowering studies. It is possible that other CETP inhibitor studies were too short to achieve an effect.

During the press conference, the attendants speculated about the mechanism through which anacetrapib might reduce the number of serious coronary events; possibly the effects on non-HDL play a role. Landray noted that an event reduction of 9% cannot be explained by only a doubling of HDL-c levels. Thus there must be other elements that lead to this, maybe the strongly decreased non-HDL-c. This reduction matches the curve of risk reduction of coronary death and MI events seen in LDL-c lowering statin studies. This hypothesis is corroborated by genetic studies that show that CETP-related variants that are associated with a lower coronary risk, are mostly associated with lower LDL. Thus, it appears as though non-HDL is the main cause of the observed effect of anacetrapib. 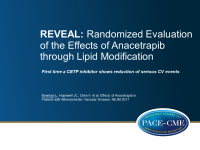 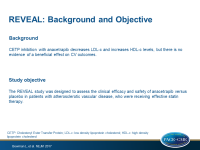 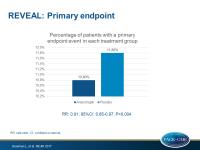 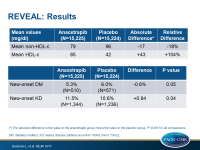