Source, lecture held by prof Lawrence Leiter, Departments of Medicine and Nutritional Sciences at the University of Toronto

Since the US Food and Drug Administration (FDA) mandated demonstration of CV safety for new antihyperglycemic drugs, various trials evaluating DPP-4 inhibitors, GLP-1RAs and SGLT2 inhibitors on CV outcomes have been completed or are ongoing. Results will be briefly discussed and are summarized in table 1.

The DPP-4 inhibitors were the first class to have completed CV safety trials: the SAVOR trial testing saxagliptin, the EXAMINE trial with alogliptin, and the TECOS trial with sitagliptin (17-19). Although the populations in these studies were slightly different, all patients were at high risk for CVD and the primary endpoint in these trials was major adverse cardiovascular events (MACE) or MACE plus. The overall results were quite consistent; HRs were (around) 1.00. The drugs showed no superiority, but demonstrated CV safety, thus complying with the FDA request.

One difference between the results of these trials was the risk for HF; a significant increase was observed with the tested drug in the SAVOR trial, the EXAMINE trial showed a non-significant increase for HF, and in the TECOS trial the HR for HF was 1.00 (17, 18, 20). This difference in safety for HF is not understood. Two ongoing trials with DPP-4 inhibitors are the CARMELINA study testing linagliptin and the CAROLINE study evaluating linagliptin vs. the SU glimepiride. The latter is the only trial of a new antihyperglycemic drug with an active comparator.

GLP-1RAs show more pharmacological differences amongst the drugs than other classes, resulting in more differences in the results of the trials testing them. The ELIXA trial on lixisenatide was done in post-ACS patients (21), the LEADER trial evaluated liraglutide (22), and the SUSTAIN-6 trial tested semaglutide, which is given once weekly (23). Both the LEADER and SUSTAIN-6 trials included patients with established CVD (80%) and patients at high-risk for CV events (20%). The EXSCEL trial tested exenatide, given once weekly, in patients with high risk for CVD (24). Thus, the study populations were fairly similar, except that in ELIXA all patients had ACS and in the other trials 70-80% of patients had a history of CVD.

Ongoing trials with GLP-1RAs are the FREEDOM trial evaluating a subdermal infusion pump, which is inserted every 3-6 months. A smaller phase 3 trial testing this device demonstrated CV safety, but no superiority, however the details of the trials are not published yet. Other ongoing trials in high-risk populations are the REWIND trial testing dulaglutide and the HARMONY OUTCOMES trial evaluating albiglutide given once-weekly. Completion of these studies is expected in the next 1 to 2 years.

The CANVAS program, consisting of the pooled CANVAS and CANVAS-R trials, showed a 14% reduction in the primary outcome. The individual components, CV death, non-fatal MI and non-fatal stroke were all reduced with canagliflozin, although non-significantly because there was not enough power. A significant reduction of 33% for HF hospitalization was seen with canagliflozin. In the CANVAS program, safety data showed an increase in genital yeast infections, a significant increase of symptoms of volume depletion, a two-fold increased risk of lower limb amputations and an increase in fractures.

Ongoing trials with SGLT2 inhibitors are the VERTIS study testing ertugliflozin in ~8000 patients at high risk for CV events, the DECLARE study evaluating dapagliflozin in ~17000 patients and the CREDENCE trial testing the effect of canagliflozin on renal outcomes.

Effects of new drugs in the real world

It is important to note that these studies were done primarily in patients with known CVD. In the real world, only 20% of patients with diabetes have a history of CVD (27). It will be interesting to see the results of primary prevention of CV events in patients in the real world. The finding that some new diabetes drugs give reduction in CV outcomes (canagliflozin, empagliflozin, liraglutide, semaglutide) should be translated to clinical practice: patients with diabetes and known CVD should be prescribed therapies for which there is evidence of CV benefit.

Table 1: Overview of trials with new classes of antihyperglycemic drugs and CV outcomes. 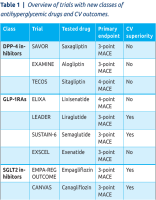