In the ARIC study, the associations between SMI and CMI with HF versus those with no MI were evaluated, and the consistency of these associations was assessed in subgroups stratified by gender, race, and HF risk factors.

ARIC is a community-based, bi-racial, prospective cohort study designed to examine clinical outcomes and CV risk factors of atherosclerosis, , which included 15,792 adults, aged 45-64 years [3]. For the present analysis, participants were excluded if they had a history of prevalent CVD at baseline, as well as those with missing or bad quality ECGs, or missing risk factor or HF data, and those who were of neither African-American nor white race, leaving a study population of 9,243 individuals.

The definition of SMI was based on the traditional ECG findings without clinical evidence of an acute MI, and CMI was defined according to guidelines. Incident HF was defined as the first occurrence of HF hospitalization according to the International Classification of Diseases.

In a large, community-based study, both CMI and SMI were significantly associated with HF, compared with the absence of MI. These results suggest that it might be worth paying particular attention to patients with SMI in the context of HF prevention.

In their editorial article [4], Gibson et al. comment that the analysis of Qureshi et al. contributes with new evidence to the early identification of an elevated HF risk in patients with SMI. As SMI accounts for 5 to 30% of the total number of all nonfatal MI [5], the addition of this outcome to a composite endpoint may increase the number of events in a clinical trial. This would result in increased statistical power, reduce the required sample size and thereby reduce the duration and cost of RCTs. In addition, early identification of patients with increased risk of HF is crucial because early initiation of treatment may improve the prognosis of patients and thereby reduce healthcare costs. Furthermore, the authors discuss the limitations of the study: the exclusion of a large number of patients with missing ECGs, the retrospective nature of the HF diagnosis, the use of ECGs only for the diagnosis of SMI, and the lack of imaging evidence of the SMIs. They conclude: ‘Nonetheless, in an era when complex microRNA samples and biomarkers are being developed to identify patients with an increased risk of heart failure, Qureshi et al. remind us that, sometimes, preventive cardiology could be as simple as a Q-wave.’ 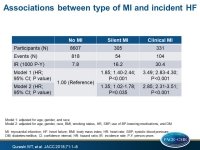