Important modifiable risk factors (RFs) for the development of an acute myocardial infarction (AMI) are hypertension, dyslipidemia, smoking, obesity, and diabetes mellitus (DM) [1-5]. Data have shown high prevalence rates of at least one of these RFs during a first or any episode of AMI [1,4,6]. Prevalence rates of these RFs are actually increasing in those experiencing an AMI [7,8]. Baseline RF profiles are dependent on sex and race [9-13]. Epidemiological data are an important basis for the implementation of primary and secondary preventive strategies to reduce the burden of chronic heart disease in appropriate patient populations.

However, few studies have focused on recent temporal trends in the prevalence of these RFs during a first AMI in younger patients. Preventive measures may be particularly effective in this population.

Primary outcomes were the overall prevalence of the RFs in the age subgroups, sex and race differences in RF prevalence, and respective temporal trends during the study period.

Age and prevalence of modifiable RFs during a first AMI 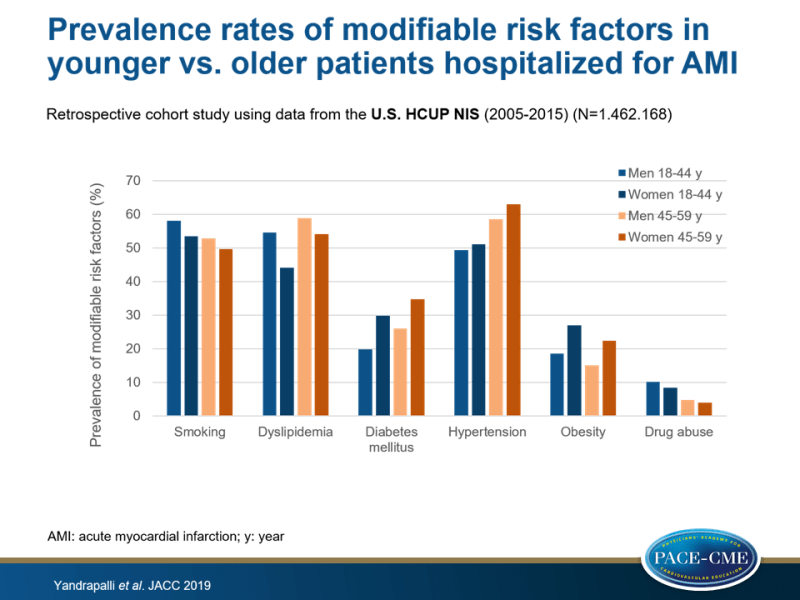 In this retrospective cohort study, major modifiable atherosclerotic RFs were highly prevalent among younger (aged 18-44 years) U.S. patients hospitalized for a first AMI. Over 90% of patients had at least one such RF. Significant sex and racial differences were seen for individual RFs. Prevalence rates of RFs progressively increased between 2005 and 2015, except for dyslipidemia, which increased through 2012 and 2013 and then gradually decreased until in 2015. These data can help to reduce the burden of chronic heart disease by planning appropriate preventive strategies in specific patient populations.

In her editorial comment [14], Safdar stresses the need for discovering clues that could guide a clinician to quickly identify an AMI when evaluating younger patients. A lower suspicion for AMI, atypical presentation and the fact that noncardiac causes of chest pain are more common in younger adults, may cause a delay in diagnosis.

She discusses lessons learned from the current study that are comparable with those found in the INTERHEART study. Both studies showed sex-risk attribution of modifiable risk factors for AMI. Hypertension, diabetes and obesity contribute to a higher risk for AMI in women, whereas smoking and dyslipidemia increased risk for AMI in men. These findings indicate that ‘consideration of these nuances could help the clinician to better risk-stratify young patients presenting with angina-equivalent symptoms’. Also, she highlights the need for better screening for AMI risk in younger patients who are often undertreated due to underestimates in standard risk stratification scores, especially in women. Young patients without a prior history of AMI are more likely to present at the time of their first AMI to a generalist rather than a cardiologist and widespread dissemination of sex-specific clues for consideration in patients with angina-equivalent symptoms is therefore critically.

Safdar emphasizes that it remains unknown whether risk factors are differentially linked with different phenotypes of AMI, and if their mitigation has a variable effect on primary and secondary prevention of these AMI or related outcomes. The author concludes: ‘AMI in the young is no longer a needle in the haystack, although it may present in different forms and needs newer lenses. And thus, to serve these patients better, we need to think beyond the traditional models of AMI and our search must continue for all causes of coronary ischemia.’