A large evidence base shows that statin therapy gives a relative risk reduction of major vascular events of about 20% for each mmol/L reduction in LDL-c for each year, after the first year, of treatment. The only serious adverse effects of the statins itself that have been shown to occur, albeit at very low rates, are myopathy, new-onset diabetes mellitus and possibly hemorrhagic stroke. In addition, statin therapy may cause symptomatic adverse events such as muscle pain or weakness. However, placebo-controlled randomized trials have demonstrated that almost all of the symptomatic adverse events that are attributed to statin therapy in general practice represent misattribution, as they are not actually caused by the statin treatment. Importantly, over 90% of patients who were re-challenged with another statin or another dose after they had discontinued statins, could tolerate the new statin regimen. This suggests that many of the reported statin-related events have other causes.

A European Atherosclerosis Society (EAS) Consensus Panel has summarized and critically reviewed the available evidence on adverse effects attributed to statin therapy, and concluded that treatment with statins is remarkably safe. While they acknowledge the modest risk of new onset diabetes it may confer, it is noted that per case of diabetes, five CV events are avoided with statin therapy. Clinicians should be reassured by the long-term safety of statins and that the benefits far outweigh the risk of any adverse effect.

>> Back to key lessons 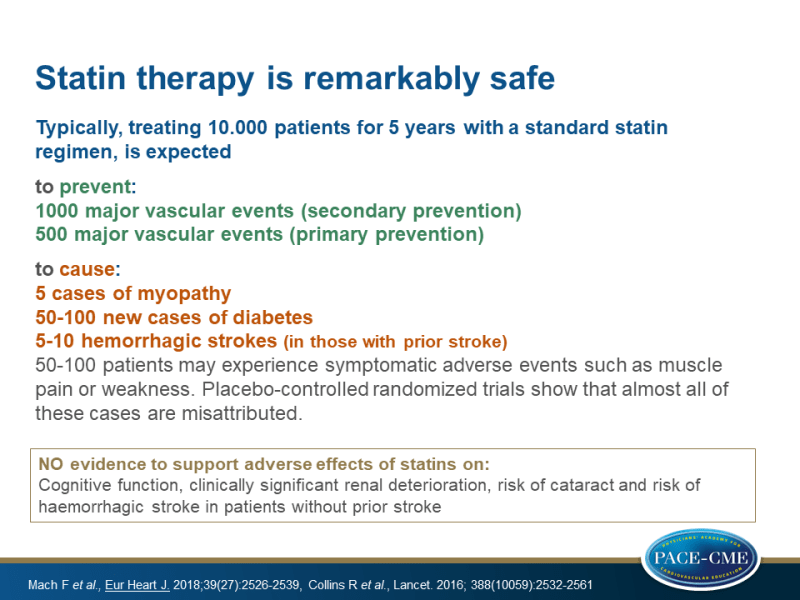