The iron-heart hypothesis, proposed in 1981, is based on the sex difference in CV disease that persists until women reach menopausal age. The apparent protection in women was linked to lower iron stores as a results of menstrual blood loss. Moreover, it was hypothesized that whole-blood donation could be beneficial for CV risk, since more than 70% of iron in a human body is in erythrocytes [1].

Evidence for a protective effect of blood donation has been demonstrated in two studies [2,3], but another study did not confirm a benefit on myocardial infarction in high-frequency donors, when compared with non-donors [4]. This may be explained by not having been able to exclude the bias from the healthy donor effect (HDE) in the first two studies. This is why subsequent studies have compared frequent donors to lower frequency donors, or have attempted to address the HDE in other ways.

This study aimed to reduce the HDE by applying a ‘qualifying period’ [5]: a period in which participants must first qualify themselves into the study by meeting all inclusion criteria, in this case 10 years of active donorship. It assessed the relation between blood donation and incident CVD by including the large cohort of all Dutch whole-blood donors. The number of donations in the first 10 years of being a donor were used to determine exposure status: high-, medium- or low-frequency. Note that men are allowed to donate 5 times a year and women 3 times, thus sex-specific tertiles of number of donations were constructed (boundaries for men: 15 and 22, 12 and 16 in women). Follow-up started after the qualification period, thereby separating the period in which the exposure was determined and the period in which the outcome is observed, thus theoretically minimizing the HDE. The donation data were linked to the Municipal Personal Records Database (MPRD) and the Dutch Hospital Data database for mortality and morbidity data. Morbidity was considered a first occurrence of either a CV main discharge diagnosis or a primary CV death and in the mortality analysis primary CV death was considered. 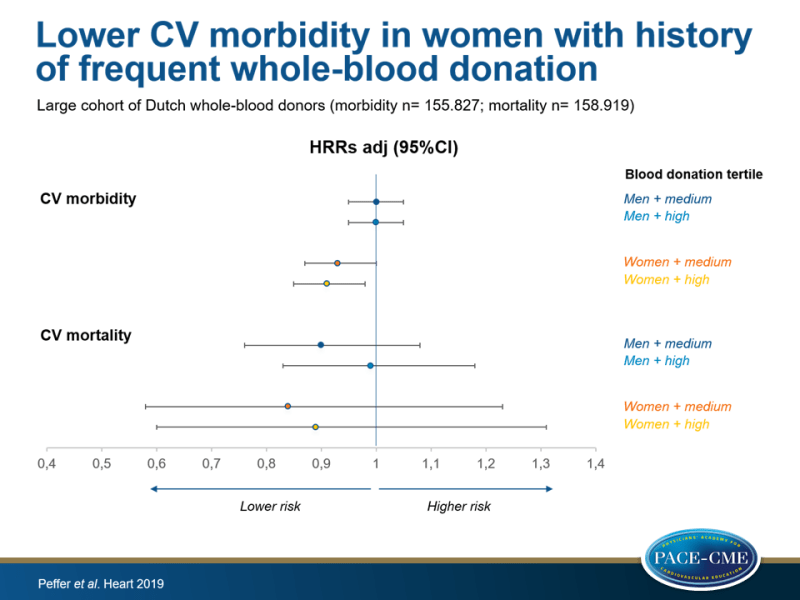 These data of Dutch whole-blood donors show a protective effect of long-term, frequent donation on CV morbidity in women, but not men, as compared with those not frequently donating. No effect was seen on CV mortality, possibly due to a low number of events. By only including individuals who had donated for 10 years already, and comparing those who frequently donated with those who did it less often, the investigators aimed to address the healthy donor effect.

Download the slide Find this article online at Heart