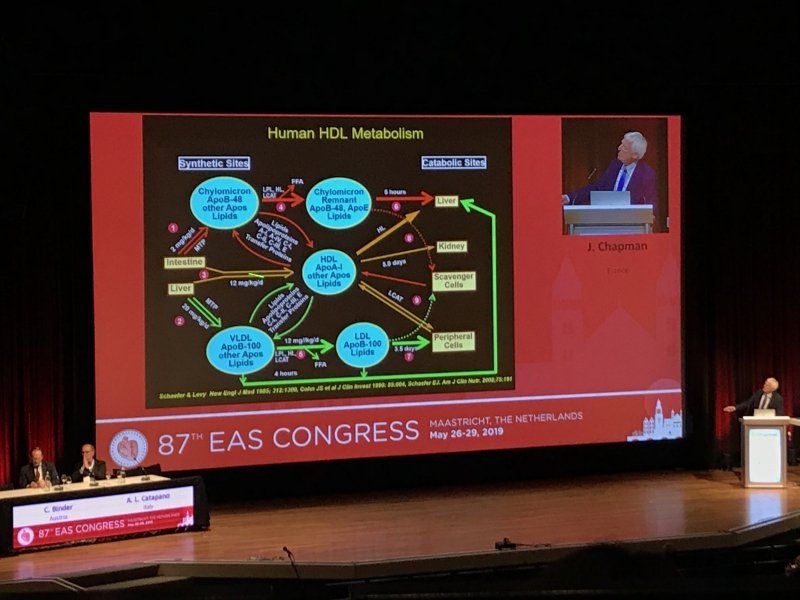 Clinical interest in HDL is historically low, but research into HDL never stopped. With interesting results

The HDL story: time to reconsider?

The HDL story has always been a complicated one, as data have not always been consistent. Equine HDL was isolated in 1929, and the link between HDL-c and CV risk was first described in 1977. Recent important time points include 2004, when clinical trials of HDL-raising therapies were started. For instance, with CETP inhibitors. These trials were markedly negative, or neutral. Then interest in HDL dropped from a clinical point of view. But, Chapman noted, research into HDL never stopped.

In 2007 came a new surge of interest, revolving around various ‘omics’.

Where are we now, in 2019? Chapman summarized the situation as ‘we ran, before we could walk’. By this, he meant to say that we do not understand the biology of HDL or for instance CETP inhibition yet. Do we know enough about HDL in health and disease states, and can we translate the biological activities of HDL particles into therapeutic targets, and if so, how, and in which disease states? The answer, not surprisingly, is no.

HDL is composed of protein and lipids, and the amount of each component can vary. “HDL” refers to particles that fall in the density range of 1.063 to 1.210 g/mL, which is protein-rich, and lipid-poor.

When measuring HDL-c, this refers to the sum of cholesterol content in all HDL particle subpopulations in blood plasma. Chapman noted that we have slid into the assumption that the cholesterol in the HDL particle itself is atheroprotective, but nothing is further from the truth.

Measured HDL-c is a static metric. But, he emphasized by showing a slide full of arrows between complex processes: HDL is an extremely dynamic particle. Plasma HDL particles can have a range of sizes, as well as protein/lipid compositions. Moreover, HDL particles can be produced by hepatocytes, peripheral cells, or cells in the intestine. This heterogeneity of plasma HDL particles is clearly not captured in a single value when measuring HDL-c level. When measuring HDL-c in plasma, one sees the sum of all metabolic processes that impact what we call ”HDL”. The real action of HDL is only partially in plasma, though. Importantly, interstitial fluid, rather than plasma, carries much HDL, albeit in a simpler form.

Now, what is the relationship of “HDL-c” levels to CV death, IHD and MI? Data of the Copenhagen cohorts suggest that there seems to be a range of concentrations in which it is associated with a minimum of CV risk. That raises the question which features of HDL particles associate with this lower risk, which functions of the particle are at play? Again, it is important to realise that HDL has a plethora of different biological activities. Ranging from a role in reverse cholesterol transport and regulation of glucose homeostasis, to, but not limited to, anti-inflammatory and anti-oxidative activity and a role in endothelial repair and regulation of hematopoiesis. These roles have yet to be related to the clinical situation.

Another busy slide showed the many components and subgroups in the HDL proteome that are to be identified, in many functions, also beyond cholesterol metabolism and transport. It is now known that HDL particles can also contain more than 1 apoA particle. Overall, it can be said that the degree of metabolic and structural heterogeneity of HDL particles is huge.

As an example, Chapman zoomed in on HDL subspecies with highly specialized function. Advancing understanding of a particular subspecies has led to development of recombinant phospholipid transfer protein (PLTP), a protein involved in HDL metabolism. An injection of recombinant PLTP in mice attenuated the cytokine response to lipopolysaccharide (LPS). Thus, the PLTP injections show a protective effect against inflammation. The recombinant protein is now being tested in men in phase I trials, because it might represent a very interesting therapy in sepsis.

Chapman also focussed on insulin-resistance driven dyslipidemia: why do these patients have such high CV risk? In this situation, many of HDL’s functions are perturbed, among which cholesterol efflux capacity, and the antioxidative, anti-inflammatory, anti-apoptotic and vasodilatory activity.

He wondered whether there could be a lipid-dominant metabolism in insulin resistance? Researchers of a study into type 2 diabetes (T2D) patients noted that ‘dyslipidemic small HDL particles were distinguished by a subnormal plasmalogen/apoAI ratio, consistent with elevated oxidative stress in T2D’. Plasmalogens normally attenuate oxidative stress in the human system. Insulin-resistant states feature oxidative stress and HDL with defective antioxidative function.

In metabolic syndrome and T2D, statin treatment is first line therapy to reduce CV risk. Could it be that statins impact the HDL lipidome beyond minor increment in HDL-c and apoAI in insulin-resistant states? And, might statins improve the antioxidant status of functionally-defective HDL in prediabetes? The CAPITAIN study set out to answer these questions by evaluating the effect of pitavastatin 4 mg/day in men with metabolic syndrome. In response to treatment, triglycerides (-41%), remnant cholesterol (-55%) and LDL-c (-40%) levels were lowered, but HDL-c apoAI levels were not (+3-6%). But, interestingly, a delayed response of HDL was seen; after complete reduction of LDL, HDL is still equilibrating to those changes. When looking at the plasmalogen-content of HDL3 in metabolic syndrome, it was noted that certain species were preferentially elevated after statin treatment. This seems pathophysiologically significant, because fewer lipid hydro-peroxide is formed, elevated levels of which are predictive of nonfatal vascular events.

Thus, we should not loose interest in HDL. What does the future hold for HDL? Chapman thinks that resolution of functionally- and structurally-defined HDL protein-lipid complexes can potentially identify new therapeutic targets. These can then be matched to functional deficiencies of HDL particles in major disease states.

Listen to prof. Chapman in a video on this topic