The omega-3 polyunsaturated fatty acids (ω3 PUFAs) eicosapentaenoic acid (EPA) and docosahexaenoic acid (DHA) are important factors of CV health [1-3], but data on CV benefit in coronary heart disease (CHD) and HF with use of supplements are contradictory. In patients with CHD, survival benefit was observed with ω3 PUFAs by prevention of sudden death [4-8] and some studies suggest that ω3 PUFAs might improve outcomes in HF patients [9-13]. In contrast, a meta-analysis comprising data of >77000 participants showed no benefit of supplemental ω3 PUFAs in patients with CHD [14]. Of note, in the meta-analysis, HF was not evaluated as an endpoint and studies using sufficient doses to achieve meaningful concentrations are lacking. Studies in a mouse model of HF have demonstrated that left ventricular function was preserved and interstitial fibrosis was prevented with dietary ω3 PUFAs at supraphysiological levels [15].

The Multi-Ethnic Study of Atherosclerosis (MESA) is a longitudinal cohort study including African American, Hispanic, Asian, and white adults in the US [16,17]. In this analysis of the MESA cohort, 6562 participants were included between July 2000 and July 2002. It was examined whether EPA abundance (% EPA) is associated with risk for HF. Also, the association of EPA levels with incidence of HFrEF and HFpEF was studied and whether the association between EPA and HF incidence was unique among ω3 PUFAs.

Baseline levels of 25 fatty acids (FA) were measured and 8 clusters were identified. EPA status was defined as insufficient (<1.0%), marginal (≥1.0% and ≤2.5%), or sufficient (>2.5%) to prevent HF on the basis of a prior definition of EPA levels that prevent HF in animal models [3]. Outcome was HF events, adjudicated by physicians based on medical records. For adjustments, the FA with the largest within-cluster correlation was identified as the lead FA and used as adjuster. Median follow-up was 13.0 years. 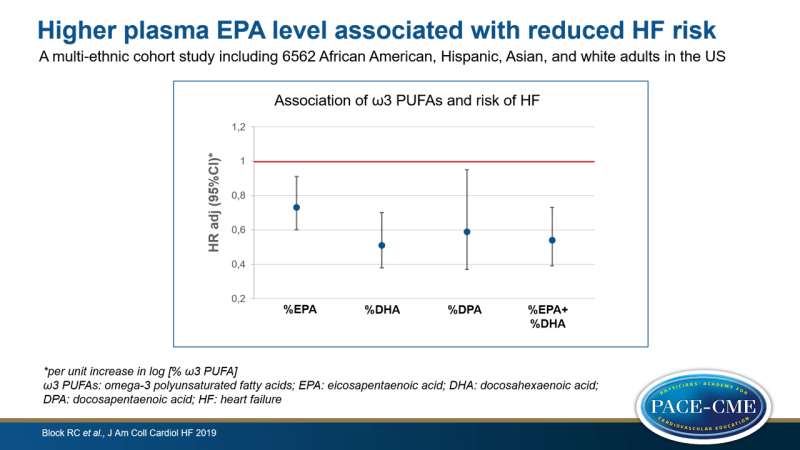 In the MESA cohort of participants of multiple ethnicities, higher %EPA was associated with reduced HF risk, both for HFrEF and HFpEF. This inverse association was also observed for the ω3 PUFAs DPA and DHA and was strongest for EPA plus DHA. Interventions that could result in EPA levels >4.0% may reduce the incidence of HF in the general population.

After a brief summary, Maggioni [18] discussed the limitations of this study. There is a low number of HFpEF cases and more importantly, there is a small number of participants with sufficiently high levels of ω3 PUFAs to be protective. Most intervention studies have used a dose of 1 gram/day, but it is questionable whether this gives CV beneficial effects. More recently, the OMEGA-REMODEL and REDUCE-IT trials have demonstrated benefit with higher doses of ω3 PUFAs. Maggioni therefore asked what the role of ω3 PUFAs in CV medicine in 2019 should be. No benefit has been observed for low dose of 1 gram/day in primary prevention, but a higher dose of 4 gram/day EPA has been demonstrated to reduce major atherothrombotic events, including CV death, in those with a history of CVD. In response to the question whether we need to go to the fish market or to the pharmacy to elevate ω3 PUFAs levels, he answered that high levels may be achieved by use of pharmacological preparations. He concluded: ‘if we want to move from hypotheses to more reliable evidence, it is probably the time to redesign adequately sized randomized clinical trials testing high dosages of omega-3 fatty acids on top of current optimized pharmacological and nonpharmacological therapies’.

Download the slide Find this article online at JACC HF