Both rhesus monkey studies and observational human studies suggest that calorie restriction (CR) may yield protective effects against CV disease or atherosclerotic risk factors [1-4]. Little is known about the extent of cardiometabolic changes induced by CR of longer than 1 year in healthy adults (<50 years) of normal weight or who are slightly overweight.

is a 2-year, multicenter, randomized controlled trial set up to evaluate the potential of CR to promote anti-ageing adaptations in resting metabolic rate and body core temperature. The primary analysis showed that baseline resting metabolic rate adjusted for weight change decreased significantly more in the CR than in the ad libitum group at 12 months, but not 24 months [6].

This analysis aimed to evaluate the short-term and long-term effects of random assignment to a 25% CR regimen on multiple cardiometabolic risk factors implicated in progression of atherosclerotic CV disease. The analysis was performed in all individuals completing the 2-year CALERIE protocol, which is a healthy, young and middle-aged non-obese population of men and women. Participants were randomly assigned (2:1) to a behavioral intervention of 25% CR, or to an ad libitum control group. A longitudinal weight loss trajectory was predicted based on a pilot study on 25% CR. Adherence to the CR intervention was determined in real time by the degree to which individual weight change followed the individualized weight loss trajectory. The precise level of CR was also retrospectively quantified by calculating the total daily energy expenditure by doubly labeled water and adjusting total daily energy expenditure for changes in body composition. 220 Eligible participants were randomized, of whom 218 started the assigned intervention: 143 to the CR diet and 75 to the control diet, of whom 117 and 71 respectively, completed the study. 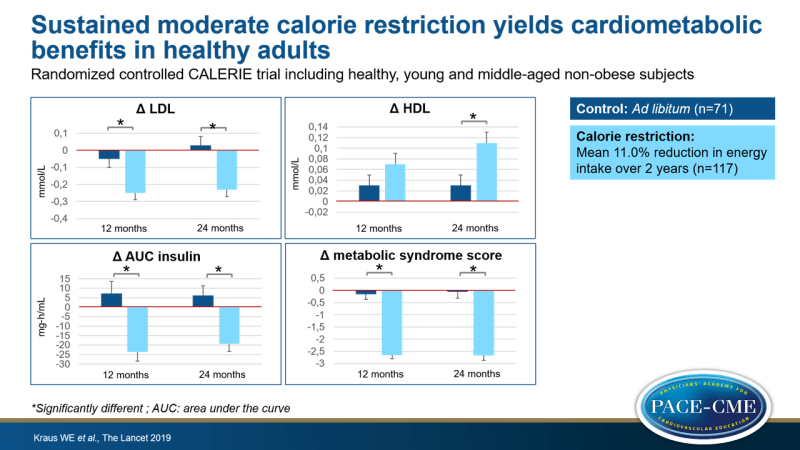 This study shows that two years of moderate calorie restriction with adequate nutrition in healthy non-obese young and middle-aged individuals, with clinically normal risk factors at baseline, leads to improvements in multiple cardiometabolic risk factors. This implies that the CV risk profile is improved. The data also indicate that sustained calorie restriction exerts beneficial effects on cardiometabolic health beyond those conferred by the weight loss.

In his editorial comment [7] , Frank Hu said that the CALERIE trial was groundbreaking: it was the first long-term CR intervention in non-obese participants with a large sample size, energy intake and expenditure were carefully measured, retention rate and compliance were high, and detailed time-course data for cardiometabolic risk factors were collected. Despite these strengths, reduction in energy intake over 2 years was ~12% instead of the targeted 25% CR, dropout rate was higher in de CR group than control group (18% vs. 5%), and generalizability is low.

Hu then switched to discussing alternative strategies for weight control and extension of lifespan, such as intermittent energy restriction or fasting, which have shown to be at least as effective as energy restriction. Carbohydrate restriction and adherence to healthier diets may be other options to improve outcomes, or a combination of CR and other strategies. Moreover, compounds that mimic CR or fasting such as resveratrol, metformin and rapamycin have shown some benefit with respect to healthy ageing, but more research with these agents in this field is needed.

The challenge of implementing CR in daily practice is reliably counting calories and determining optimal levels of CR for individuals. Hu therefore said: ‘From a public health standpoint, an important strategy for healthy ageing is to focus on preventing excess weight gain and maintaining a healthy bodyweight throughout the life course.’

Hu finished by stating that CR could be a useful tool in weight control, but is unlikely to change the global obesity epidemic. ‘Improving the food environment by making healthy food choices more accessible, affordable, and the norm while reducing the accessibility of ultra-processed and highly palatable foods is essential to supporting healthy food choices and behavior. To this end, policy solutions including sugar taxes, financial incentives for producing and purchasing healthy foods, food labelling, and better regulation of food marketing are needed to improve the global food environment.’