Hospitalization for acute HF (AHF) is a predictor for rehospitalization and CV mortality in the months after discharge [1]. However, this risk differs among HF patients, due to heterogeneity of the HF population. Information about the magnitude of risk in a patient with AHF following hospitalization is of importance in guiding the direction of medical management [2-4]. Left ventricular ejection fraction (LVEF) has been proven useful in confirming the diagnosis of HF and in setting recommendations for medical therapies [5]. However, the value of LVEF in predicting the clinical outcome of patients with AHF after hospitalization is unclear. This study evaluated the relationship between LVEF measured during AHF hospitalization and outcomes after discharge in the Relaxin in Acute Heart Failure 2 (RELAX-AHF-2) trial.

The RELAX-AHF-2 was a multicenter, randomized, double-blind, placebo-controlled phase 3 trial that enrolled hospitalized patients with AHF [6]. Patients were randomized to receive either serelaxin for 48h or matching placebo. The two treatment arms were pooled in the present analyses, because of the neutral effect of serelaxin on the studied outcomes, consisting of CV death and worsening HF [7]. 6128 Patients were included in the present analyses. Patients were classified based on LVEF measured during index hospitalization: Q1, LVEF 17-29% (n=1548); Q2, LVEF >29-38% (n=1556); Q3, LVEF >38-50% (n=1815); and Q4, LVEF >50-87% (n=1209). LVEF was also analyzed as a continuous variable.

The primary composite endpoint was CV death or HF/renal failure (RF) rehospitalization through day 180. Other outcomes were the two components of the composite outcome separately and all-cause mortality through day 180. 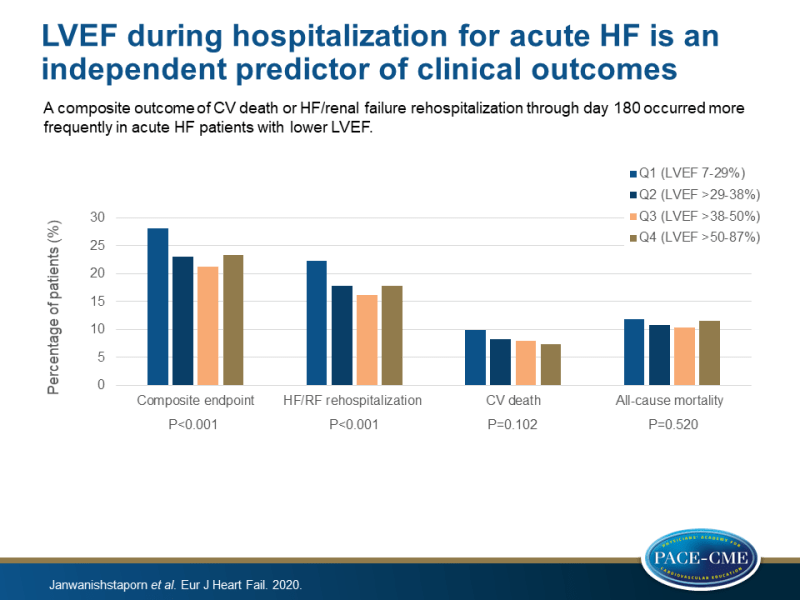