Discontinuation of Smokeless Tobacco and Mortality Risk after Myocardial Infarction

Oral moist snuff is a form of smokeless tobacco, of which the use is increasing worldwide. In Sweden, 20% of male and 3% of the female adult population use snus, the Swedish form of snuff, on a daily basis. Cardiovascular effects of smokeless tobacco have not been studied extensively, but acute autonomic and hemodynamic effects such as endothelial dysfunction [1,2], increased blood pressure, heart rate and blood levels of adrenaline [3,4] have been described. Contradicting results have been published on a possible higher risk of (fatal) myocardial infarction (MI), including suggestions that snus may predispose to arrhythmic or other serious complications of MI.
This study aimed to evaluate whether snus users who experience an MI benefit from discontinuation of snus use. Data from the Swedish SWEDEHEART nation-wide quality register were used. A prospective sample of patients with a recent MI were included. The primary study sample included all subjects who were using snus at the time of MI, and a second sample included those who were smoking at the time of MI. Median follow-up time was 1.9 years, with a maximum of 4.9 years (total 40370 person-years at risk (PYAR)). 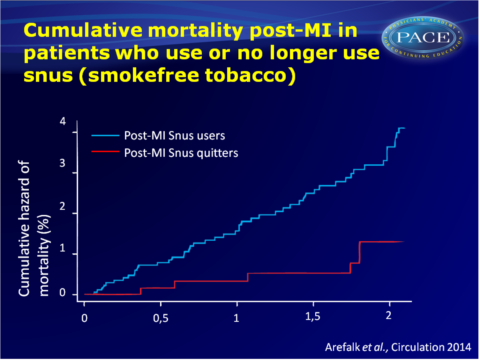 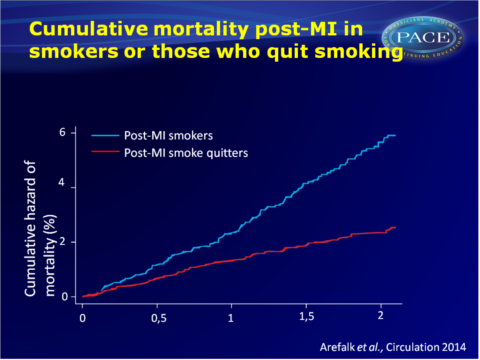 In this large prospective cohort, discontinuation of snus use after a MI, was associated with nearly half the mortality risk, irrespective of many other relevant covariates. The benefit of quitting this form of smokeless tobacco after an MI was similar to the undisputed benefit of smoking cessation, which was confirmed in this study.