Prevalence of Diabetes among Men and Women in China

Prevalence of Diabetes among Men and Women in China

Cardiovascular disease has become the leading cause of death in China, a development that has followed rapid economic
growth, an increase in life expectancy, and changes in lifestyle.1 Diabetes is a major risk factor for cardiovascular disease, and the prevalence of diabetes is high and is increasing in China.2-4. A national survey conducted in 1994, involving
224,251 Chinese residents, 25 to 64 years of age, from 19 provinces, showed that the prevalences of diabetes and impaired glucose tolerance were 2.5% and 3.2%, respectively.2 These estimates were higher by a factor of approximately 3 than those reported in 1980.3 In a cross-sectional study in 2000–2001 involving a nationally representative sample of 15,540 adults, 35 to 74 years of age, the prevalences of diabetes and impaired fasting glucose were 5.5% and 7.3%, respectively.4 Although these studies have documented a marked increase in the prevalence of diabetes in China, they cannot be compared directly, owing to methodologic differences in sampling and to differences in the criteria used to define diabetes.2-4 Furthermore, the prevalences of diabetes and prediabetes were probably underestimated in these studies because 2-hour oral glucose-tolerance tests were not performed in all participants. It has been suggested that isolated hyperglycemia 2 hours after glucose loading is common among Asian patients with diabetes.5 For example, in the Shanghai Diabetes Study, 48.6% of patients with newly diagnosed diabetes had isolated hyperglycemia 2 hours after glucose loading, and 75.0% of those with prediabetes had isolated impaired glucose tolerance.6

The China National Diabetes and Metabolic Disorders Study, conducted from June 2007 through May 2008, was a cross-sectional study designed to provide current and reliable data on the prevalences of diabetes and associated metabolic risk
factors in the adult population in China.

Because of the rapid change in lifestyle in China, there is concern that diabetes may become epidemic. We conducted a national study from June 2007 through May 2008 to estimate the prevalence of diabetes among Chinese adults.

METHODS
A nationally representative sample of 46,239 adults, 20 years of age or older, from 14 provinces and municipalities participated in the study. After an overnight fast, participants underwent an oral glucose-tolerance test, and fasting and 2-hour glucose levels were measured to identify undiagnosed diabetes and prediabetes (i.e., impaired fasting glucose or impaired glucose tolerance). Previously diagnosed diabetes was determined on the basis of self-report.

CONCLUSIONS
These results indicate that diabetes has become a major public health problem in China and that strategies aimed at the prevention and treatment of diabetes are needed. 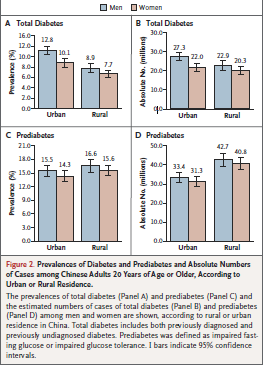