Study of Heart and Renal Protection


BACKGROUND:
Lowering low-density lipoprotein (LDL) cholesterol with statin therapy has been shown to reduce the incidence of atherosclerotic events in many types of patient, but it remains uncertain whether it is of net benefit among people with chronic kidney disease (CKD).

RESULTS:
A total of 9,438 CKD patients were randomized, of whom 3,056 were on dialysis. Mean age was 61 years, two thirds were male, one fifth had diabetes mellitus, and one sixth had vascular disease. Compared with either placebo or simvastatin alone, allocation to ezetimibe plus simvastatin was not associated with any excess of myopathy, hepatic toxicity, or biliary complications during the first year of follow-up. Compared with placebo, allocation to ezetimibe 10 mg plus simvastatin 20 mg daily yielded average LDL cholesterol differences of 43 mg/dL (1.10 mmol/L) at 1 year and 33 mg/dL (0.85 mmol/L) at 2.5 years. Follow-up is scheduled to continue until August 2010, when all patients will have been followed for at least 4 years.

CONCLUSIONS:
SHARP should provide evidence about the efficacy and safety of lowering LDL cholesterol with the combination of ezetimibe and simvastatin among a wide range of patients with CKD.


Observational studies in unselected populations have shown that there is a continuous positive relationship between coronary heart disease (CHD) risk and blood low-density lipoprotein (LDL) cholesterol that extends well below the range seen in Western populations.1, 2 A meta-analysis of randomized trials has shown that statin therapy reduces the incidence of major coronary events (nonfatal myocardial infarction [MI] or CHD mortality), of ischemic strokes, and of coronary revascularizations by about one fifth for every 1-mmol/L (39-mg/dL) reduction in LDL cholesterol, while producing no benefit on hemorrhagic stroke or on vascular causes of death other than CHD.3, 4 Among people without known chronic kidney disease (CKD), in whom estimated glomerular filtration rate (eGFR) is typically greater than about 60 mL/min/1.73 m2, the proportional reduction in the risk of a major vascular event (ie, major coronary event, stroke, or coronary revascularization) appears to be independent of renal function.4

The Study of Heart and Renal Protection (SHARP) aims to address these uncertainties by assessing the effects of reducing LDL cholesterol by an average of about 1 mmol/L among about 9,000 patients with CKD (about 3,000 of whom were to be on dialysis at randomization). The first United Kingdom–Heart and Renal Protection (UK-HARP-1) pilot study8 indicated that, to obtain an average absolute reduction in LDL cholesterol of 1 mmol/L in a large-scale trial lasting 4 to 5 years, it was likely to be necessary to use a regimen that could reduce LDL cholesterol by about 45% to 50%. To achieve such a reduction without the use of high statin doses (which are associated with an increased risk of myopathy,9 especially in patients with impaired renal function10), a low dose of a statin (simvastatin 20 mg daily) was combined with the cholesterol-absorption inhibitor ezetimibe, and the biochemical efficacy and tolerability of this regimen were confirmed in the UK-HARP-II pilot study.11

Although the chief aim of SHARP is to determine any vascular benefits of LDL lowering among patients with advanced CKD, the trial also provides an opportunity to test the hypothesis that lowering LDL cholesterol might reduce the rate of loss of renal function.12 Among people without known CKD, meta-analyses of randomized trials have suggested that statin therapy might reduce the rate of loss of eGFR by about one third13, 14; so a similar proportional effect among patients with advanced CKD, in whom there is rapid loss of renal function, would yield a worthwhile delay in the need for renal replacement therapy (ie, dialysis or transplantation). 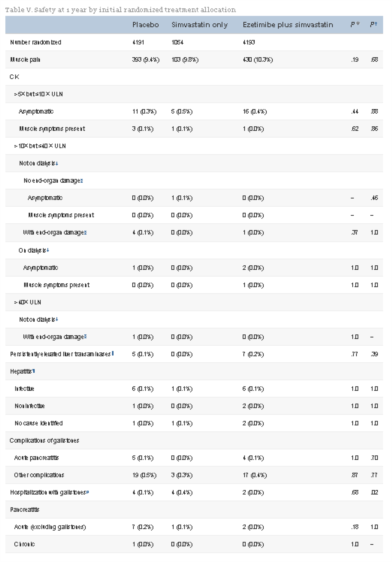 Statin therapy is now widely recommended for the primary and secondary prevention of vascular disease in a wide range of people,20, 21, 22 but 2 previous trials have failed to show a clear benefit among patients with end-stage renal failure who were undergoing dialysis.6, 7 Consequently, there remains considerable uncertainty as to whether lowering LDL cholesterol is of value among dialysis patients, as well as among those with less severe renal impairment who have not yet commenced dialysis. The SHARP trial, which has recruited >9,000 patients with advanced CKD, 3,000 on dialysis and 6,000 not, can help to address this clinical uncertainty.

In the International Conference on Harmonisation–Good Clinical Practice Statistical Principles for Clinical Trials, it is recommended that checks are made during a trial that its actual performance has not affected statistical power, that assumptions underlying the original design remain plausible, and that the statistical analysis plan remains appropriate in the light of emerging results from other relevant trials.23 The guidelines indicate that, until the study treatment has been unblinded, it is appropriate to make any changes that might help the trial to provide more reliable information about the effects of treatment. In particular, it is stated that “The primary variable … should be the variable capable of providing the most clinically relevant and convincing evidence directly related to the primary objective of the trial.”23 The overall incidence rate for major vascular events (4.3% per annum) in SHARP was slightly higher than had been anticipated; but blinded central adjudication showed that about one third of these events were noncoronary cardiac deaths or hemorrhagic strokes, which an updated meta-analysis of statin trials has indicated are not prevented by LDL-lowering therapy.4 In addition, unblinded review of the lipid assays in SHARP showed that the mean LDL cholesterol reduction at 2.5 years (ie, at about the midpoint of the trial) was 33 mg/dL, rather than the anticipated difference of 39 mg/dL. Based on the larger-than-expected proportion of major vascular events that were nonatherosclerotic (and so not likely to be reduced by LDL-lowering therapy) and the smaller-than-expected reduction in LDL cholesterol, a relative risk reduction of 13% in the original primary outcome of major vascular events may be all that can realistically be expected. Table VI indicates that SHARP would have only 66% power at P = .01 (2-sided) to detect such a difference among the ~8400 patients initially randomized to ezetimibe/simvastatin versus placebo (Arm 2 versus Arm 1 in Figure), which is the population specified in the protocol for the primary comparison.
SHARP is overseen by an independent Steering Committee that includes nephrologists, cardiologists, clinical trialists, and statisticians, with 2 nonvoting observers from the funder. The independent sponsor is the University of Oxford, and the trial is funded by the supplier of the study drugs (Merck & Co). Changes to the study plans in response to a revision of the underlying sample size assumptions are entirely appropriate provided that care is taken to avoid bias by, as in the case of SHARP, remaining blind to the effects of study treatment on the efficacy outcomes.23, 24 Consequently, in October 2009, the Steering Committee decided to change the primary outcome to major atherosclerotic events, defined as the combination of MI, coronary death, ischemic stroke, or any revascularization procedure (ie, exclusion of noncoronary cardiac deaths and strokes confirmed to be hemorrhagic from the original major vascular event outcome). A relative risk reduction of 18% in this revised outcome seems realistic, and Table VI shows that SHARP has good statistical power to detect such an effect among the 8,400 patients initially randomized to ezetimibe/simvastatin versus placebo. Moreover, because even better power can be achieved by including those patients who were randomly allocated between ezetimibe/simvastatin versus placebo following allocation to simvastatin for 1 year (ie, arm 3b vs 3a in Figure 1), the Steering Committee decided that the main comparisons should include them. These and other changes are described in the revised statistical analysis plan for SHARP (online Appendix A).

The independent sponsor is required by its contract with the funder to seek its formal agreement to any protocol change, but the funder declined to approve the changes agreed by the Steering Committee. Although it is not possible to revise the protocol accordingly, the Steering Committee is free to change the statistical analysis plan as it considers appropriate while it remains blind to the effects of treatment on efficacy end points. The present report and related appendices are, therefore, intended to record that the chief emphasis for evaluating the efficacy of study treatment in SHARP will now not be on the primary outcome in the protocol of major vascular events, but will instead be on the new key outcome of major atherosclerotic events. This change of emphasis should help to reduce the risk of a false-negative result (in which a potential beneficial effect on atherosclerotic outcomes is diluted by a lack of benefit on nonatherosclerotic components), a scenario that would have adverse consequences for patients.

During the conduct of SHARP, an unexpected concern was raised by the SEAS placebo-controlled trial of ezetimibe 10 mg plus simvastatin 20 mg daily among 1,873 people with moderate aortic stenosis about an apparent excess risk of cancer (105 on ezetimibe plus simvastatin vs 70 on placebo, P = .01).25 The SHARP investigators received agreement from its Data Monitoring Committee to access unblinded data on incident cancers (but no other clinical events), as did the investigators for IMPROVE-IT, which is comparing simvastatin plus ezetimibe versus simvastatin among 18,000 patients with acute coronary syndrome.26 When these interim data on cancer were examined together in a meta-analysis,27 they did not provide support for the hypothesis that ezetimibe might cause cancer; and their Data Monitoring Committees recommended that each trial continue. Completion of SHARP in 2010 (and, subsequently, of IMPROVE-IT in 2013) will provide additional evidence about the effects on cancer and other nonvascular outcomes of adding ezetimibe to simvastatin (which has been shown on its own to be safe in large-scale trials3, 4).

In conclusion, SHARP has randomized 9,438 patients with CKD to receive LDL-lowering therapy or placebo for an average of about 4.4 years. Final follow-up will be completed by August 2010, and the results will be presented by the end of the year. As described above, the chief emphasis will be on the revised outcome of major atherosclerotic events (and not on the protocol-defined outcome of major vascular events), although results will also be presented for the original primary and other efficacy and safety outcomes.