Cardiovascular mortality is high among chronic kidney disease (CKD) patients [1]. Hyperphosphataemia has emerged as one key factor in the development of vascular calcification [2] and cardiovascular mortality [3]. Hyperphosphataemia has been associated with left ventricular hypertrophy [4] and renal failure progression [5]. In CKD patients, it has been suggested that an elevation in serum phosphate of 1 mg/dL would translate in a 23% increase in mortality [6]. However, daily and postprandial variability of serum phosphorus can be >1 mg/dL, making data interpretation difficult [7]. Additionally, in healthy individuals, serum phosphorus levels in the upper normal range have been associated with higher risk of carotid atherosclerosis, coronary calcification and cardiovascular mortality [8].

In CKD patients, the glomerular filtration of phosphate decreases progressively with the reduction of functioning nephrons. However, the increase in serum levels of both parathyroid hormone (PTH) and fibroblast growth factor 23 (FGF23) reduce the tubular reabsorption of phosphate (TPR) and increase the fractional excretion of phosphate [FE(PO4)]. FGF23 levels increase early in CKD and therefore FGF23 is considered an early biomarker of phosphate overload [9, 10]. Also, the fact that FGF23 increases early in the course of CKD makes it an early biomarker of a decreased glomerular filtration rate (GFR) that may have a direct negative impact on progression of CKD and vascular events [11]. In renal patients receiving an acute load of dietary phosphate, both PTH and FE(PO4) increase, while FGF23 remains stable. Thus, changes in FGF23 appear to be slow and progressive, accompanying the decrease in GFR, independently of transient loads of phosphate [12]. By contrast, serum PTH increases in response to a phosphate load and to hypocalcaemia. These compens tory mechanisms enable the kidney to maintain phosphate excretion, prevent hyperphosphataemia and keep serum calcium (Ca) in the normal range until an advanced stage of CKD [13].
High FGF23 levels are associated with increased mortality in haemodialysis patients, independently of serum phosphate levels [14]. Therefore, high FGF23 may behave as a positive phosphate balance marker and may also have potential direct deleterious biological activity. It has been hypothesized that reduction of FGF23 may be a future therapeutic goal in CKD patients. The early use of phosphate binders, even in the presence of normal serum phosphate, significantly reduced mortality in haemodialysis patients [15]. Thus, studies should address whether the early use of phosphate binders, even before serum phosphate is elevated, prevents vascular calcification and reduces mortality in early stages of CKD. In the meantime, it would be interesting to assess whether the early use of phosphate binders decreases FGF23, a biomarker of mortality in CKD [14]. The present study was designed to evaluate prospectively the changes in phosphaturic hormones (FGF23 and PTH) in normophosphataemic patients with Stage 3 CKD in response to the phosphate binder lanthanum carbonate [16, 17].

In chronic kidney disease (CKD) patients, the ability to excrete a phosphate load is impaired. Compensatory increase in parathyroid hormone (PTH) and fibroblast growth factor 23 (FGF23) promote phosphaturia. Serum FGF23 concentration is considered an early biomarker of excess phosphate load and high levels of FGF23 have been associated with increased mortality. In the present study, we have evaluated the changes in plasma FGF23 after treatment with the phosphate binder lanthanum carbonate in patients with CKD-3 and a normal serum phosphate concentration.

No significant changes were observed in serum phosphate, however, lanthanum carbonate significantly decreased urinary excretion of phosphate and fractional excretion of phosphate (P < 0.004). This was accompanied by a significant decrease in carboxyterminal FGF23 (median percent change from baseline21.8%(interquartile range4.5, 30%), P ¼ 0.025). No changes were observed in PTH. Conclusions. In conclusion, lanthanum carbonate reduced phosphate load, as assessed by urinary phosphate excretion, and also reduced plasma FGF23 in CKD-3 patients. This occurs in the presence of unchanged normal serum phosphate levels. 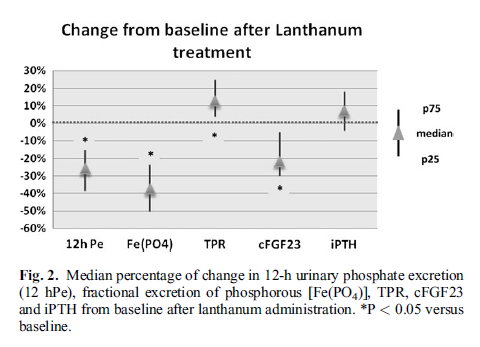