About 35 million people have an acute coronary or cerebrovascular event every year and about half of these events occur in individuals with pre-existing vascular disease.1 The number of people with known prevalent cardiovascular disease worldwide probably exceeds 100 million. β blockers,2 angiotensin-converting-enzyme (ACE) inhibitors,3,4 statins,5 and antiplatelet drugs6 each reduce death, reinfarction, or stroke in patients with coronary heart disease.7,8 Similarly, use of antiplatelet drugs, ACE inhibitors, or statins, coupled with reduction of blood pressure with diuretics, β blockers, ACE inhibitors, or angiotensin-receptor blockers (ARBs), is beneficial in patients with stroke.9 Such drugs are widely recommended for the management of patients with cardiovascular disease or their risk factors. Some studies of hospital registries or surveys of patients recruited in out-patient or general practice clinics (mainly in high-income countries) report moderate to high rates of drug use.10–12 Because about 75% of the burden of cardiovascular disease falls on low-income and middle-income countries, relevant data for secondary prevention practices are needed in countries at various stages of economic development and in different regions.13 Furthermore, many individuals live in rural areas where access to medical care can be restricted, and few data exist for differences in the use of secondary prevention medications between people in urban or rural settings. The Prospective Urban Rural Epidemiology (PURE) study was designed to assess rates of use of key drugs for secondary prevention in populations with prevalent cardiovascular disease from urban and rural communities in such countries.


The study recruited 382 341 individuals from 107 599 households in 628 communities (348 urban and 280 rural) in 17 countries on five continents. Patients with coronary heart disease or stroke in high-income countries had the highest rates of drug use, which decreased with declining country economic wealth. Strong correlations between overall rates of drug use and per head health expenditure by country (figure 3) and gross domestic product were noted. Striking variations in the use of effective drugs (ie, antiplatelet drugs, β blockers, ACE inhibitors or ARBs, and statins) existed between regions with the highest rates of drug use (North America and Europe) and those with the lowest rates of use (Africa), where such drugs were used in less than 10% of patients with previous coronary heart disease or stroke. Use of statins was especially low in south Asia (3.5% [34 of 970 patients]), China (1.7% [53 of 3070]), and Africa (1.1% [3 of 283]). 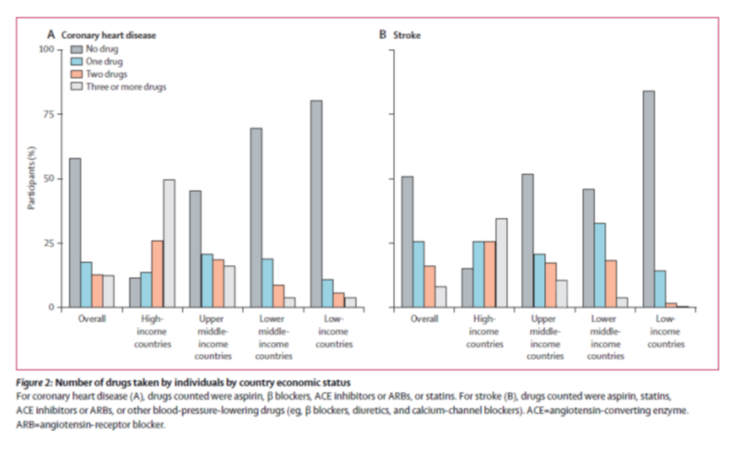 Effective preventive drugs for coronary heart disease and stroke are underused globally, with striking variation between countries at different stages of economic development. Even the use of accessible and inexpensive treatments such as aspirin varied seven-fold between low-income and high-income countries but the use of statins varied 20-fold. Such non-community studies tend to provide an overestimate of the rates of drug use in a population, because they do not include individuals who have no access to medical care, those who are not longterm drug users, or those who have discontinued active follow-up by a doctor. Consequently, data from hospital registries or general practices tend to substantially overestimate the rates of actual use of secondary prevention drugs in a population.

The authors plan therefore to systematically obtain information about the barriers to optimum care in communities participating in PURE, and in various types of individuals to inform national and community policies for improving availability, access, and affordability of essential drugs for chronic conditions. Such information will also assist in development and implementation of structured longterm programmes that could involve non-physician health workers, low cost and affordable combination therapies (eg, the polypill),14,15 and better educate patients and health-care providers about the benefits, safety, and lifelong need for basic secondary prevention strategies. This study shows the large gap that exists in secondary prevention worldwide, with extremely low rates of use of effective therapies in middle-income and low-income countries. Systematic efforts are needed to understand why even inexpensive drugs are substantially underused globally. Efforts to increase the use of effective and inexpensive drugs for prevention of cardiovascular disease are urgently needed, and would substantially reduce disease burden within a few years.

9 Sacco RL, Adams R, Alberts G, et al. Guidelines for the prevention of stroke in patients with ischemic stroke or transient ischemic attack: a statement for healthcare professionals from the American Heart Association/American Stroke Association Council on Stroke: co-sponsored by the Council on Cardiovascular Radiology and Intervention: the American Academy of Neurology affi rms the value of this guideline. Stroke 2006; 37: 577–617.

13 World Bank. How we classify countries. http://data.worldbank.org/about/country-classifi cations (accessed May 19, 2011).

14 The Indian Polycap Study (TIPS). Eff ects of a polypill (Polycap) on risk factors in middle-aged individuals without cardiovascular