Sodium intake: a risk factor for endothelial dysfunction and hypertension

Association between sodium intake and change in uric Acid, urine albumin excretion, and the risk of developing hypertension. 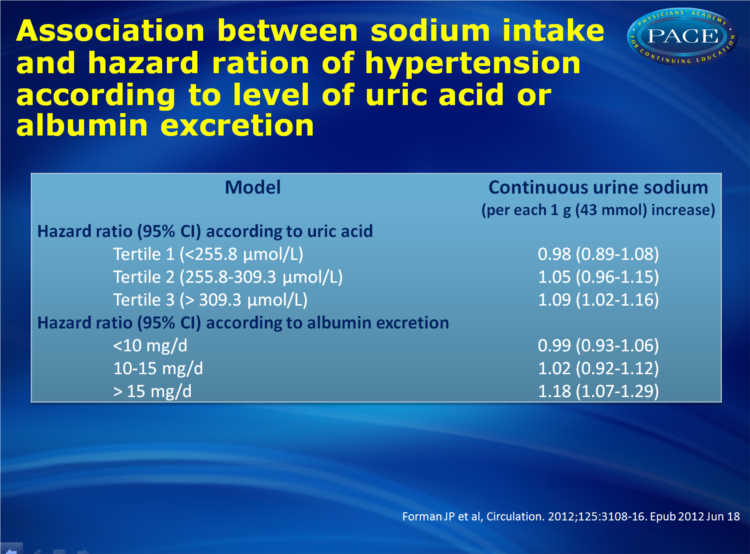 A high sodium intake over a longer term may lead to endothelial dysfunction and vascular damage, resulting in an increased risk for developing hypertension.

Background:
A high-sodium diet has little short-term effect on blood pressure in nonhypertensive individuals but, for unclear reasons, is associated with hypertension if consumed long term. We hypothesized that a chronically high sodium intake would be associated with increases in biomarkers of endothelial dysfunction, specifically serum uric acid (SUA) and urine albumin excretion (UAE), and that high sodium intake would be associated with incident hypertension among those with higher SUA and UAE.

Methods and results:
We prospectively analyzed the associations between sodium intake and the change in SUA (n=4062) and UAE (n=4146) among participants of the Prevention of Renal and Vascular End Stage Disease (PREVEND) study who were not taking antihypertensive medications. We also examined the association of sodium intake with the incidence of hypertension (n=5556) among nonhypertensive participants. After adjustment for confounders, each 1-g-higher sodium intake was associated with a 1.2-μmol/L increase in SUA (P=0.01) and a 4.6-mg/d increase in UAE (P<0.001). The relation between sodium intake and incident hypertension varied according to SUA and UAE. For each 1-g-higher sodium intake, the adjusted hazard ratio for developing hypertension was 0.98 (95% confidence interval, 0.89-1.08) among those in the lowest tertile of SUA and 1.09 (1.02-1.16) among those in the highest tertile. Corresponding hazard ratios were 0.99 (confidence interval, 0.93-1.06) among participants whose UAE was <10 mg/d and 1.18 (confidence interval, 1.07-1.29) among those whose UAE was >15 mg/d.