Efficacy and safety of apixaban compared with warfarin according to patient risk of stroke and of bleeding in atrial fibrillation: a secondary analysis of a randomised controlled trial.

In the ARISTOTLE trial (Apixaban for Reduction In STroke and Other ThromboemboLic Events in atrial fibrillation), apixaban (a novel oral direct factor Xa inhibitor) was compared with warfarin for the prevention of stroke or systemic embolism in patients with atrial fibrillation and at least one additional risk factor for stroke [1].

This analysis focused on data from 18,201 patients based on stroke and bleeding risk assessment scores (CHADS2, CHADS2-VASc and HAS-BLED).

Consistent stroke and major bleeding reductions were demonstrated with apixaban compared with warfarin in patients with differing levels of baseline risk. Current risk scoring systems for tailoring anticoagulation treatment to individual patients may be less relevant when using apixaban for patients with AF who have at least one risk factor for stroke.

The decision to give an anticoagulant to a patient with atrial fibrillation is a difficult one, with thromboembolism being weighed against hemorrhage, and both risks imperfectly predicted by even the best risk-stratification scores. Given the reduction in hemorrhage among apixaban-treated patients with a HAS-BLED score of >3, the latest analysis suggests that physicians might now face a less agonizing choice on behalf of high-risk patients who have not been managed well in the past.
Participants in ARISTOTLE had at least one risk factor for thromboembolism in addition to atrial fibrillation, so another trial is needed to identify the role of apixaban when no additional risk is present. In addition, cost-effectiveness analyses will need to be performed, although not only was apixaban associated with a clinical advantage over warfarin, it significantly reduced all-cause mortality. 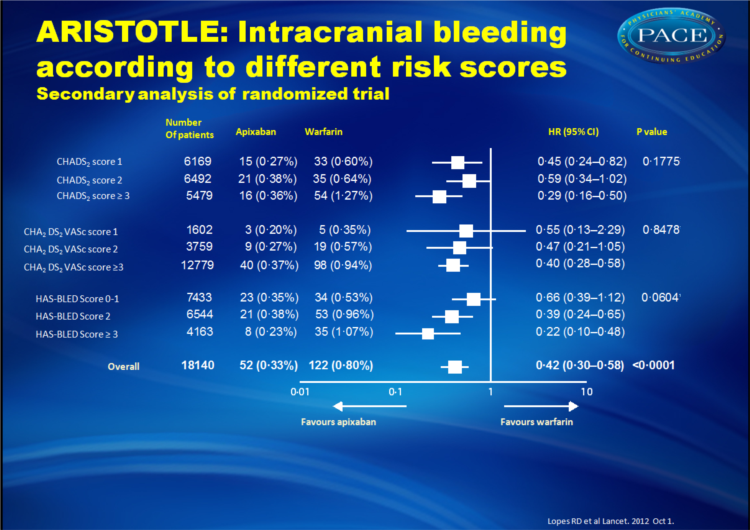 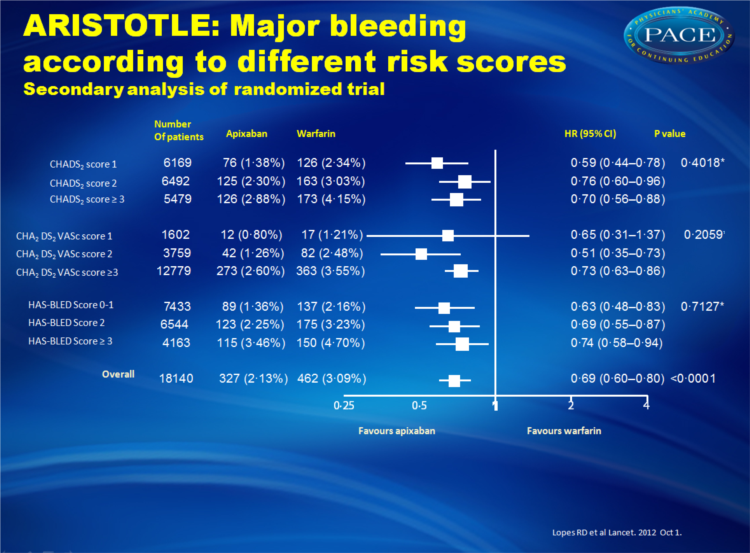 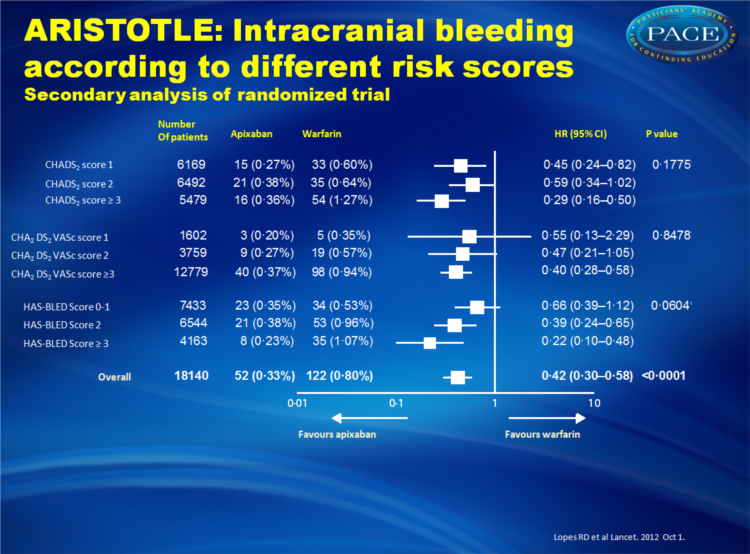 BACKGROUND:
The Apixaban for Reduction in Stroke and Other Thromboembolic Events in Atrial Fibrillation (ARISTOTLE) trial showed that apixaban is better than warfarin at prevention of stroke or systemic embolism, causes less bleeding, and results in lower mortality. We assessed in this trial's participants how results differed according to patients' CHADS(2), CHA(2)DS(2)VASc, and HAS-BLED scores, used to predict the risk of stroke and bleeding.

METHODS:
ARISTOTLE was a double-blind, randomised trial that enrolled 18 201 patients with atrial fibrillation in 39 countries. Patients were randomly assigned apixaban 5 mg twice daily (n=9120) or warfarin (target international normalised ratio 2•0-3•0; n=9081). The primary endpoint was stroke or systemic embolism. The primary safety outcome was major bleeding. We calculated CHADS(2), CHA(2)DS(2)VASc, and HAS-BLED scores of patients at randomisation. Efficacy analyses were by intention to treat, and safety analyses were of the population who received the study drug. ARISTOTLE is registered with ClinicalTrials.gov, number NCT00412984.

INTERPRETATION:
Because apixaban has benefits over warfarin that are consistent across patient risk of stroke and bleeding as assessed by the CHADS2, CHA2DS2VASc, and HAS-BLED scores, these scores might be less relevant when used to tailor apixaban treatment to individual patients than they are for warfarin. Further improvement in risk stratification for both stroke and bleeding is needed, particularly for patients with atrial fibrillation at low risk for these events.