PCSK9 levels altered by simvastin, but not ezetimibe treatment

Evidence from a Randomized Trial That Simvastatin, but Not Ezetimibe, Upregulates Circulating PCSK9 Levels.

Statins not only lower LDL-C levels, but also upregulate LDL-receptor (LDL-R) and Proprotein convertase subtilisin/kexin type 9 (PCSK9) protein [1]. PCSK9 is a protein that binds the LDLR and targets it for degradation [2]. Upregulation of PCSK9 could inhibit the beneficial effects of statins [3,4] and PCSK9 concentrations have been associated with the response to statins [5]. This suggests a physiologically and clinically relevant function of circulating PCSK9.
It is therefore interesting to study how lipid-modifying pharmacological agents affect PCSK9 concentrations. Very few data exist on the effects of ezetimibe (alone or combined with a statin) on PCSK9 levels [5]. It is furthermore unclear which other parameters might influence changes in PCSK9 concentrations during lipid-lowering therapy.
This randomised study therefore aimed to investigate the effect of ezetimibe alone or in combination with simvastatin, on circulating PCSK9 levels.

Changes in PCSK9 concentration are mostly affected by and seem tightly regulated by the decrease in LDL-C levels and by baseline PCSK9. Thus, genetic variations in PCSK9 are at play. Only simvastatin significantly influenced PCSK9 levels; ezetimibe monotherapy did not. The increase in PCSK9 levels after standard simvastatin treatment (40 mg/d) was not further enhanced after addition of ezetimibe, despite its LDL-C-lowering effect. These findings may help identify individuals who would benefit most from treatment with PCSK9 antibodies, currently under development. The results need to be confirmed in other, larger studies. 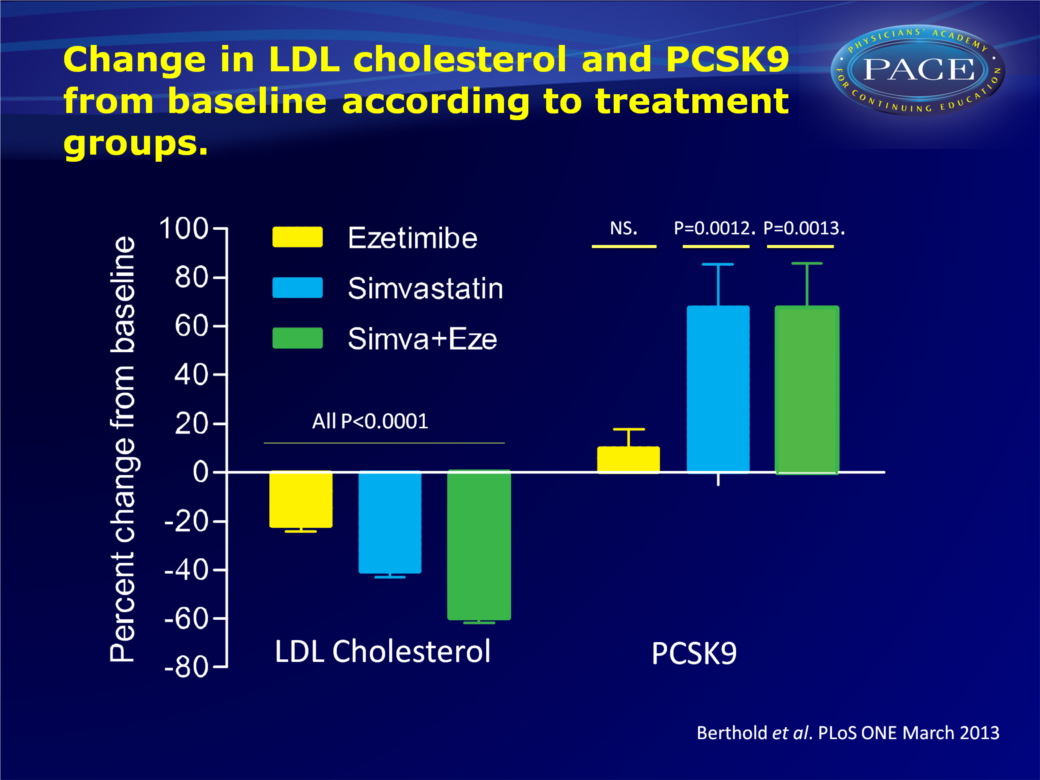