Atherosclerosis exists for over 5000 years

Atherosclerosis across 4000 years of human history: the Horus study of four ancient populations.

Atherosclerosis is commonly assumed to be a result of modern lifestyle. Its prevalence in the preindustrial era is, however, unknown.
Ancient human cultures have discovered how to mummify their dead, thus providing material for a natural experiment: this study aimed to assess the extent of vascular calcifications in preindustrial or preagricultural human beings, using modern CT scanning. Vascular calcification is a common component of mature atherosclerotic plaque and pathognomonic for atherosclerosis in modern day humans [1]. Calcification indicative of atherosclerosis has been identified with CT in a mummified subjects who lived around 3000 BCE (before common era)[2]. Evidence of atherosclerosis was also seen in autopsies of Egyptian mummies [3,4]. It should be noted however that mummification was primarily performed on elite Egyptians, so lifestyle factors might have been involved in atherogenesis.
In the HORUS study, the authors therefore asked whether atherosclerosis was seen in numerous geographically and chronologically diverse ancient societies, with different diet and genetic makeup from people in ancient Egypt. 137 mummies from four disparate geographic regions were studied by whole body CT scanning. Definite atherosclerosis was defined as a calcified plaque in the wall of an artery and atherosclerosis was regarded as probable if calcifications were seen along he expected course of an artery. 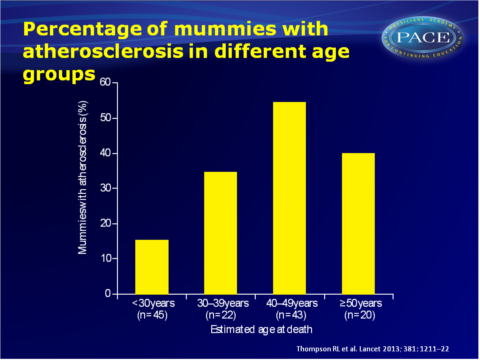 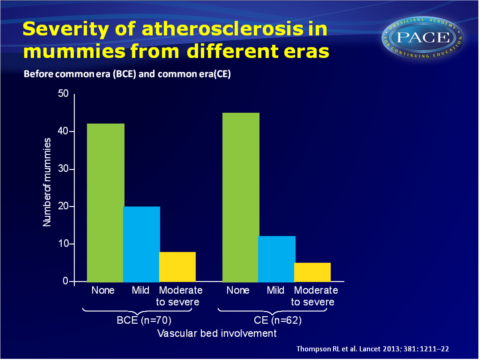 Atherosclerosis was prevalent in mummies from four different preindustrial cultures, including a pre-agricultural hunter-gatherer population, from distinct geographical regions and time periods. The diets varied between these populations, with protein sources ranging from domesticated cattle among farming Egyptians to a mostly marine diet in the hunter-gatherer culture of the Unangans. The use of fire for heating and cooking was common to all cultures, and exposure to smoke may have contributed to atherogenesis. Also, the likely high level of chronic infection may have promoted the inflammatory aspects of atherosclerosis. These observations suggest that the disease is an inherent component of human ageing rather than a characteristic of a specific diet or lifestyle.

Despite dying at young age, atheroma was evident In different ancient civilisations. Atheroma affects the circulation from an early time point and progresses throughout life. Some of the ancient populations were exposed to a fat-rich diet, but not all. Exposure to smoke from indoor fires was prominent in some cultures. Infection is likely to provide the unifying explanation of why the ancient populations should develop circulatory lesions. Inflammation is now considered to play a key role in circulatory and malignant processes. These data show that atheroma has been a burden on the human circulation for centuries.