Patients suffering from homozygous familial hypercholesterolaemia, often caused by mutations affecting the function of the LDL-receptor (LDL-R), respond inadequately to conventional drug treatment, which are generally aimed at reducing LDL-C through upregulation of hepatic LDL-R. Current standard care therefore included LDL apheresis, which transiently reduces LDL-C by more than 50%. This can delay the onset of atherosclerosis [1,2]. However, LDL levels remain elevated despite drug therapy combined with apheresis, with persistently high cardiovascular risk [3].
Lomitapide is an inhibitor of the microsomal triglyceride transport protein (MTP), a key protein in the assembly and secretion of ApoB-containing lipoproteins in the liver and intestine [4]. In a rabbit model for homozygous familial hypercholesterolaemia lomitapide substantially reduced LDL-C levels [5]. Oral intake for 18 weeks reduced LDL-C levels in 6 patients with homozygous familial hypercholesterolaemia, by reducing LDL-C production [6].
This study aimed to assess the long-term safety and efficacy of lomitapide when added to currently available lipid-lowering drug therapy with or without apheresis, during 78 weeks of treatment in adult patients with homozygous familial hypercholesterolaemia. This is a single-arm, phase 3, open-label, multi-centre study. Lomitapide was initiated at a low dose  (5 mg) which was increased to an individualised maximum dose in the presence of a low-fat diet.  In the efficacy phase mean percent change in LDL-C levels was determined in 29 patients at 26 weeks, after which 23 patients kept taking lomitapide until week 78 for safety assessment. 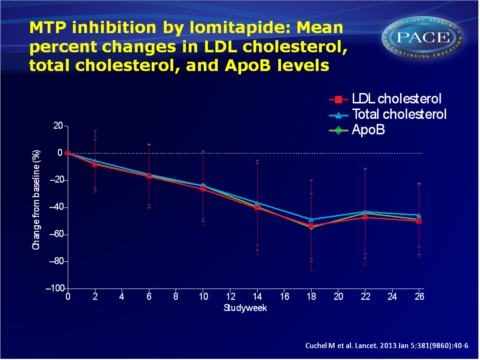 These findings show that lomitapide, when given concomitantly with other lipid-lowering therapies, significantly reduces LDL-C in patients with homozygous familial hypercholesterolaemia. Due to the rarity of the disease, studies of cardiovascular outcome are not feasible, but circumstantial evidence suggests that even a modest reduction in LDL-C levels reduces cardiovascular risk and improves survival.
This was the first long-term study of any MTP inhibitor in men, which shows that lomitapide, in combination with a low-fat diet, was generally well-tolerated and stably and substantially reduced LDL-C levels. Despite some adverse events, the benefit-risk ratio of lomitapide seems favourable for patients with homozygous familial hypercholesterolaemia.

Inhibition of MTP is potentially a powerful therapeutic method to reduce ApoB-containing lipoproteins, and LDL-C was indeed reduced by 50% at a median dose of 40 mg lomitapide. As expected based on the mechanism of action, gastrointestinal side-effects were common. Despite limitations of the study set-up, the LDL-C reductions is impressive. Given the adverse effects and that lomitapide needs to be titrated to a maximally tolerated dose in individual patients, use of this drug will probably be limited to patients who are monitored in specialised lipid clinics.
Since treatment will most likely be life-long, longer-term LDL-C reduction must be confirmed, and more importantly, progression of accumulation of liver fat to hepatic fibrosis or cirrhosis must be excluded.

It is currently unknown whether the liver findings upon lomitapide treatment are associated with an increased risk of insulin resistance, systematic inflammation, liver fibrosis and cirrhoses, and hepatic cancer. Since there is some evidence that ezetimibe reduces liver fat, dr. Santos asks the researchers in a letter to the Lancet whether the authors have data on differences in the evolution of liver fat content between patients taking ezetimibe and those who do not. Also, have markers of insulin resistance been monitored over time? Also information from liver biopsies in those who accumulated the highest amounts of liver fat, can help determine if the newer drugs can indeed, in the long run, help patients with homozygous familial hypercholesterolaemia.


Correspondence: response from the authors [9]

The authors agree that long-term consequences of liver fat accumulation must be closely monitored in clinical practice. Insulin concentrations were not measured, but fasting plasma glucose were unaffected. In one patient, two liver biopsies were performed, of which the one taken after 2 years of treatment with 40 mg lomitapide showed a modest increase in steatosis as compared to baseline, without inflammation or fibrosis.
Concerning co-administration of ezetimibe, they refer to a study by Samaha, in which treatment with lomitapide 10 mg and ezetimibe 10 mg more efficiently reduced LDL-C than did lomitapide monotherapy, but had the same frequency of aminotransferase elevation. Hepatic fat was not assessed.
It is unclear whether hepatic fat is causally related to insulin resistance, therefore the consequences of lomitapide-induced hepatic fat remain unknown. The recent approval of lomitapide by the FDA calls for a systematic addressing of these long-term questions about hepatic safety.