The growing number of very old people at high risk for stroke calls for novel strategies for early identification of high risk. Conventional vascular risk factors lose their predictive value for stroke with advancing age [1,2]. It is unclear whether risk prediction models that were constructed based on middle-aged and younger elderly subjects, can accurately identify very old subjects at high risk for stroke [3].
Cognitive impairment is common in old people and associated with brain vascular pathologies and disturbed cerebrovascular hemodynamics [4]. It has been proposed that impaired cognitive function could be a predictor for first-time stroke in middle-aged and younger elderly people [5,6].
The Framingham stroke risk score has been validated in subjects up to 85 years of age [7]. This study aimed to assess performance of the Framingham stroke risk score and cognitive impairment in predicting 5-year risk of first-time stroke in very old subjects. This observational, prospective, population-based cohort study approached people in the month of their 85th birthday. 480 subjects enrolled. Health information was obtained from the general practitioner and a home visit. 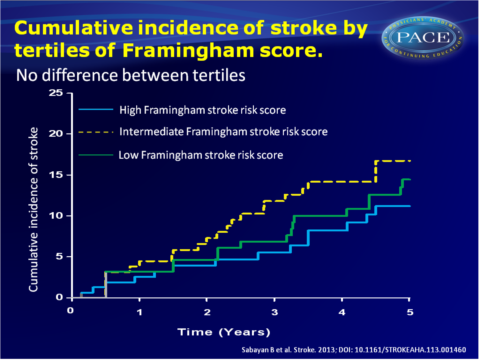 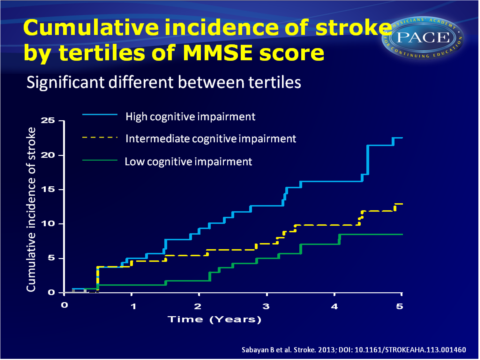 In a cohort of individuals of over 85 years old, the Framingham stroke risk score, composed of conventional vascular risk factors, did not predict risk of stroke. Low MMSE scores indicating impaired cognitive function do however identify subjects at higher risk of stroke.
These findings show that when the association between conventional vascular risk factors and cerebrovascular events is weak in the very old, cognitive assessment can be considered as a means to identify subjects at high risk for stroke.