The hepatobiliary pathway has long been considered as the major cholesterol elimination route. A non-biliary route contributing to fecal sterol loss has now also been identified in dogs, rats and later humans with impaired biliary excretion [1]. Transintestinal cholesterol excretion (TICE) is now considered a significant alternative route to the hepatobiliary pathway [2]. No evidence has been published thus far for TICE in humans. In mice TICE may account for 33% of total fecal sterol loss [3]. A potential anti-atherogenic role for TICE was suggested by observations in mice that TICE is essential to macrophage reverse cholesterol transport [4].
The hepatic LDL-receptor (LDLR) [5] and the Scavenger receptor B1 [6] are important for classical hepatobiliary cholesterol clearance. LDLR is also expressed in the intestine. LDLR density depends on cholesterol levels, transcription upregulation by statins [5] and increased LDLR degradation by PCSK9 [7]. ATP-binding cassette transporter B1 contributes to cholesterol distribution [8].
Despite these insights, much remains unknown about the precise nature and mechanisms of the TICE pathway. Using transgenic mice (PCSK9+/- and LDLR-/-) and human samples, this study aimed to answer some of the remaining questions.

This study contributes to our understanding of plasma cholesterol excretion by the small intestine. It provides the first direct evidence that human intestinal explants can excrete LDL-C and HDL-C. LDL-TICE can be modulated positively by statins and negatively by PCSK9. TICE and cholesterolemia seem inversely related, implying that TICE is an active process rather than a concentration-dependent process.

The work by Le May et al. represents an important advancement of our understanding of TICE.
Their data on HDL are unexpected and in contrast with earlier findings. Additional studies will need to resolve this issue.
The data suggest a potential involvement of LDLR on the basolateral side, as TICE could be repressed by PCSK9 and activated by a statin. This calls for translational medicine, using the newly emerging PCSK9 inhibiting treatments.
The discovered link between TICE and the LDL pathway is particularly promising. Given the current challenges in the HDL field, a new way to preferentially excrete the proatherogenic LDL-C from the body can have a major impact on the fight against atherosclerotic cardiovascular disease. 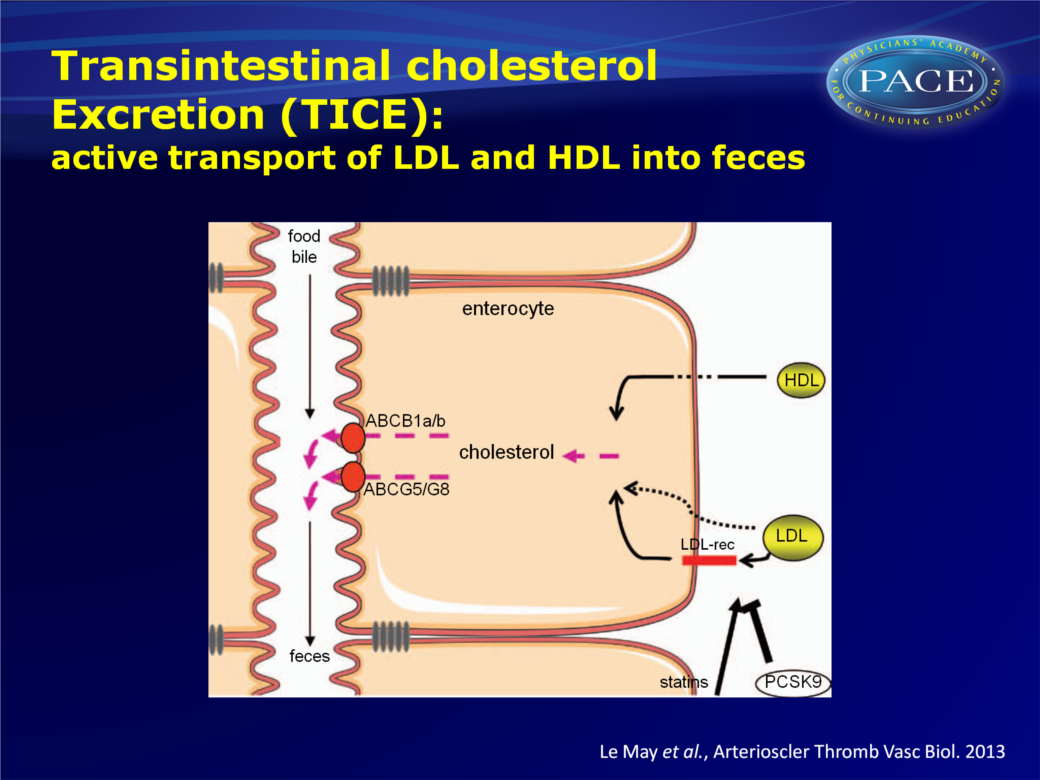