Oral Apixaban for the Treatment of Acute Venous Thromboembolism.

Conventional treatment of venous thromboembolism (VTE) consists of a parenteral anticoagualant (e.g. enoxaparin) for at least 5 days, and warfarin started at this time and continued for at least 3 months [1]. This regimen is effective but it requires daily subcutaneous injections of enoxaparin and warfarin therapy requires coagulation monitoring and dose adjustment.
Apixaban is an oral factor Xa inhibitor with a rapid onset of action. Its predictable pharmacokinetics  allow a fixed-dose regimen. Apixaban may therefore simplify the treatment of VTE because the initial parenteral anticoagulant therapy and the laboratory monitoring is no longer needed [2.3].  Apixaban has been shown to be effective for the prevention of recurrent VTE in patients who have completed 6-12 months of anticoagulant therapy for acute VTE. Rates of bleeding were similar to those for placebo [4]. The Apixaban for the Initial Management of Pulmonary Embolism and Deep-Vein Thrombosis as First-Line Therapy (AMPLIFY) trial compares apixaban (10 mg twice daily for the first 7 days, followed by 5 mg twice daily for 6 months) with conventional  anticoagulant therapy (enoxaparin 1 mg/kg bodyweight every 12 hours for at least 5 days and warfarin started concomitantly and continued for 6 months) in patients with acute symptomatic venous thromboembolism. In this randomised, double-blind trial, 5400 patients with deep-vein thrombosis, pulmonary embolism or both were followed for 6 months. The primary efficacy outcome was incidence of adjudicated composite of recurrent symptomatic VTE or death related to VTE. 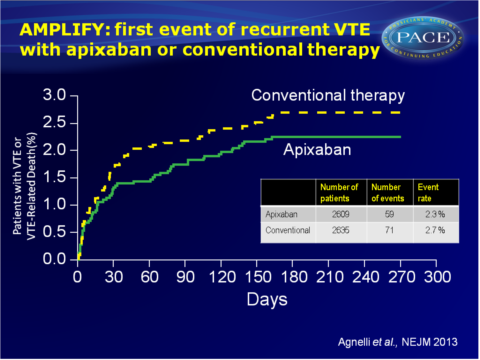 A fixed-dose regimen of oral apixaban alone was as effective as conventional treatment (enoxaparin and warfarin) for the treatment of acute VTE, and was associated with a clinically relevant reduction of 69% in major bleeding.