AMG 145, A Monoclonal Antibody Against PCSK9, Significantly Reduces Lipoprotein (a) in Hypercholesterolemic Patients Receiving Statin Therapy: An Analysis From the LAPLACE-TIMI 57 Trial.

Lipoprotein (a) (Lp(a)) consists of an apolipoprotein B100 (ApoB) molecule bound to a liver-derived glycoprotein apolipoprotein (a) (Apo(a)) [1]. Lp(a) is thought to play a role in tissue healing and innate immunity, but its exact function remains unclear, although it is now recognised for its proatherosclerotic and prothrombotic effects [2]. Lp(a) can promote smooth muscle cell proliferation, endothelial cell adhesion molecule expression, foam cell generation and endothelial dysfunction, and it can act as a competitive inhibitor for plasminogen and it has antifibrinolytic effects.
Lp(a) has now emerged as an important risk factor for cardiovascular disease (CVD) [3-5], and the European Society of Atherosclerosis recommends assessment of Lp(a) in individuals with premature CVD, familial hypercholesterolaemia, or a family history of premature CVD and/or elevated Lp(a), and/or with recurrent CVD despite statin therapy [6].
Only limited therapeutic options exist for lowering Lp(a)  levels. AMG 145 is a fully human monoclonal antibody to PCSK9, a protein synthesised and secreted by hepatocytes that binds to the LDL-receptor, thereby marking it for lysosomal degradation. AMG 145 gave significant, dose-dependent LDL-c reductions in patients with hypercholesterolemia receiving statin therapy with or without ezetimibe, in the LDL-C Assessment with PCSK9Monoclonal Antibody Inhibition Combined With Statin Therapy (LAPLACE)-TIMI 57 trial [7]. This study investigated the effect of PCSK9 inhibition with AMG 145 on Lp(a) in this patient population. 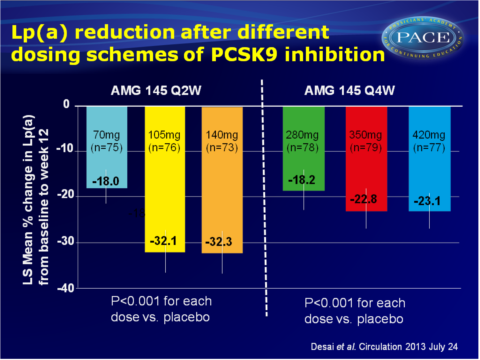 AMG 145 significantly lowered Lp(a) in subjects with hypercholesterolemia on background lipid-lowering therapy, in a dose-dependent manner, at both dosing frequencies. A plateau effect appears to occur, which is similar to the biology of PCSK9 inhibition with AMG 145. The reduction in Lp(a) was found to be consistent across several clinically relevant subgroups. Baseline Lp(a) affected the percentage Lp(a) response to AMG 145.
The precise mechanism via which AMG 145 lowers Lp(a) remains to be elucidated. The reduction of Lp(a) with AMG 145 represents an additional benefit, complementary to its LDL-c-lowering effects.


Find this article on Pubmed