Although elderly people (>65 years) form a substantial proportion of people with type 2 diabetes mellitus (T2DM), this age category is largely underrepresented in clinical studies [1]. Information is specifically lacking on glucose-lowering treatments in elderly patients with T2DM whose hyperglycaemia is uncontrolled by common antidiabetes treatments [2]. Risks and benefits of these treatments in elderly patients are unclear.
Treatment of elderly patients with T2DM is challenging due to frequent comorbidities, polypharmacy, frailty and age-related reduction in pancreatic islet function [3]. Iatrogenic hypoglycaemia can have severe consequences and should be avoided [2,4]. Targets such as HbA1c should be assessed for each individual patient, to balance potential benefits and risks of treatment [2,3,5].
Dipeptidyl peptidase-4 (DDP4) inhibitors are oral agents with little risk for hypoglycaemia [6]. Linagliptin is a DPP4-inhibitors that is mainly excreted by non-renal pathways, thus dose-adjustment is not needed for renal impairment [7]. Linagliptin also has shown minimal drug interactions. Phase III studies have demonstrated that linagliptin had meaningful glucose-lowering effects, with a low intrinsic risk for hypoglycaemia [8-12]. Linagliptin may therefore be particularly useful for treatment of elderly patients with T2DM. This randomised, double-blind, placebo-controlled study therefore tested efficacy, safety and tolerability of linagliptin 5 mg in patients of >70 years old with T2DM with inadequate glycaemic control on other common glucose-lowering drugs (linagliptin: n=160, placebo: n=78). 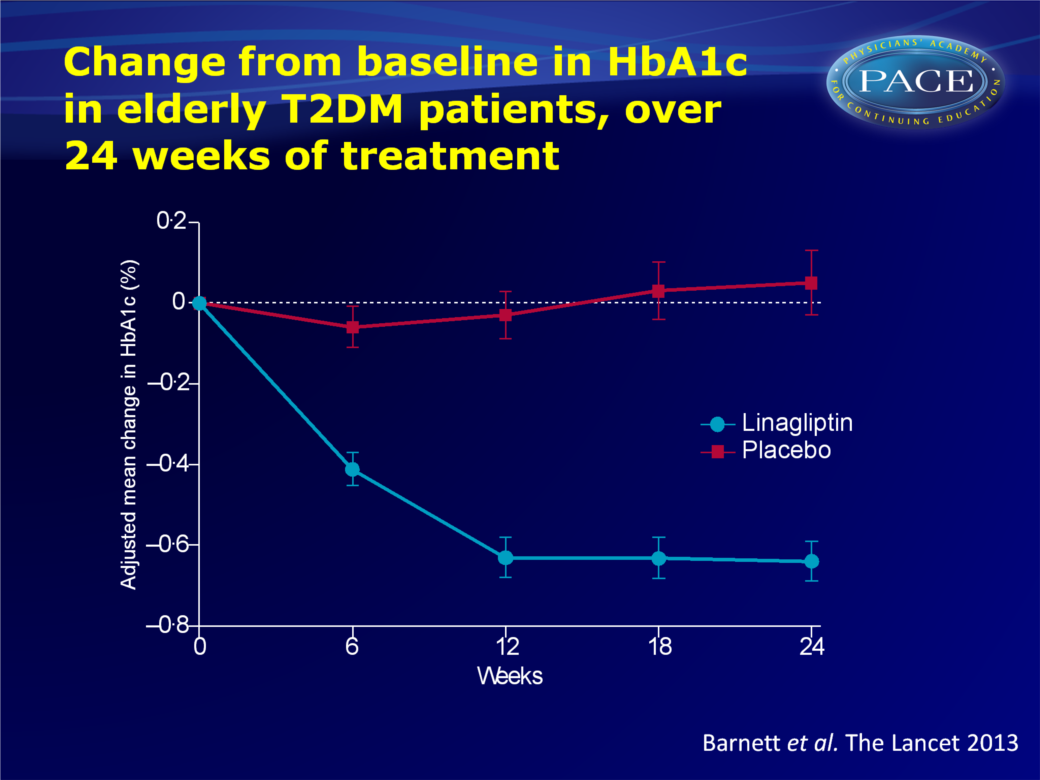 Linagliptin improved glycaemia and was well tolerated in elderly patients with T2DM who had not obtained sufficient glycaemic control with other glucose-lowering drugs. This clinically meaningful effect of linagliptin treatment was independent of age, renal impairment, or diabetes duration. Hypoglycaemia occurred more often only with concomitant treatment with sulfonylureas, thus the latter should be used with caution in the elderly. Thus, in this patient population with advanced disease and many comorborbidites , linagpliptin can be a safe and beneficial addition to existing glucose-lowering drugs.