There was a considerable and significant decrease of mortality among participants of the Tour de France, as compared to men of the same age in the general population. In addition, Tour de France participants seem to live longer.
These results do not give insight in the balance between the positive effects of intensive physical exercise and selection of a selective group of healthy athletes, vs. possible harmful effects of intensive exercise and alleged doping use.
Dr. Jouven concluded from these results at the ESC congress that the message that is often given that intensive exercise is not healthy, might not be correct. Promoting too much prudence might even be harmful to the general population.
In the discussion at the ESC congress it was remarked that this study concerns a very selective group of elite-athletes, who continue a very healthy lifestyle also after their professional sports career. When somebody is capable to ride the Tour de France, he has a large chance of living 6 years longer. It is possible that the observed effect is not specific to cycling, but rather for the extent of exercise.
The data of the general population were not corrected for smoking. But, dr. Jouven said that his recommendation to not discourage intensive exercise is still valid, because they would have seen a negative effect, had there been one. The positive effects outweigh the negative effects, according to him. 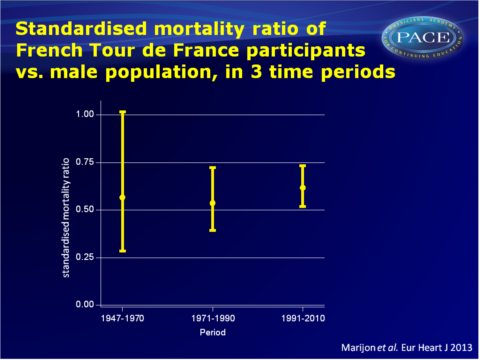