Presented at the ESC congress by: Harry Buller (Amsterdam, NL)

The Hokusai VTE study is a phase III trial that evaluates the efficacy of heparin/edoxaban tosylate (DU176b) vs. heparin/warfarin in the prevention of recurrent thrombi in patients with acute symptomatic deep vein thrombosis in the lower limbs and/or pulmonary thrombi. A larger patient group was studied than in previous trials that studied oral anticoagulants, including a large group of patients with pulmonary embolism (PE) and right ventricle dysfunction, as well as a subgroup (20%) with a high risk of bleedings as a result of renal failure and a low body weight.

In total 4921 patients with venous thromboembolism (VTE) and 3319 with PE initially received low molecular weight heparin (LMWH) and were then randomised to either 60 mg edoxaban, or standard care with warfarin, for 3 to 12 months.

The LMW heparin/edoxaban regime was non-inferior to standard care in the prevention of recurrent VTE, with fewer clinically relevant bleedings after treatment with edoxaban. Efficacy was consistent across subgroups of patients with DVT and PE.
Considering the efficacy of standard care is 90%, non-inferiority was the goal of this study. The good outcomes of edoxaban in comparison to warfarin are good news in the quest into an easier treatment of VTE.
When adjusting the dose in a subgroup with a high risk of bleeding, the efficacy was maintained, and this dose turned out to be safer than warfarin.
In the panel discussion at the ESC congress it was remarked that a certain pattern of bleedings is nowadays accepted when treating with vitamin K-antagonists. There is evidence that these bleedings are actually the result of the working mechanism (lack of factor VII) of warfarin, which causes some of these bleedings, while the new anticoagulants do not have this effect.
Previous studies have left injectable heparin out of the treatment, but the Hokusai-VTE study shows that it is unwise to not give heparine to high-risk subgroups. 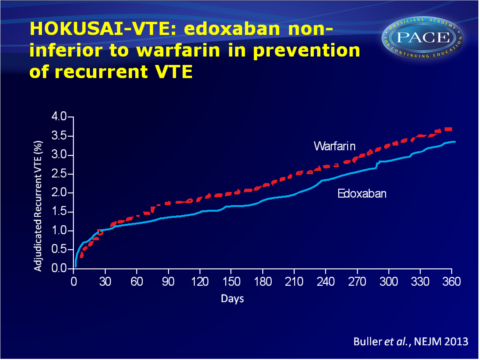 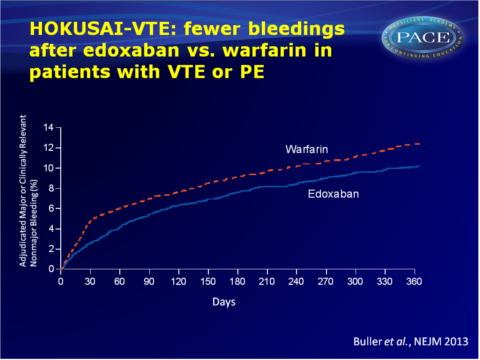