TAO: Otamixaban not superior to heparin/eptifibatide in NSTE-ACS

Anticoagulation is a cornerstone of treatment of non-ST-segment elevation acute coronary syndrome (NSTE-ACS), but there is no generally accepted gold standard. All existing therapies have limitations. Otamixaban is a new injectable factor Xa inhibitor. In the phase II SEPIA-ACS1-TIMI 42 trial promising results were seen as compared to unfractionated heparin (UFH) with eptifibatide. Considering the rapid mode of action, a moderate renal clearance and a predictable anticoagulant effect, otamixaban seems to be a appealing agent for ACS patients.
The  Treatment of Acute Coronary Syndromes with Otamixaban (TAO)  study investigated whether otamixaban is superior to UFH plus eptifibatide in patients with NSTE-ACS, who have to undergo PCI.

Otamixaban was not superior to unfractionated heparin/eptifibatide in NSTE-ACS patients who are treated with an invasive therapy, since the risk of ischaemic events was not decreased. The risk of bleedings was, however, doubled with otamixaban. A lower dose did not give better results.
Acute factor Xa inhibition thus seems to have an unfavourable efficacy/safety-balance in the context of modern antiplatelet therapy and routine early treatment of ACS.
In the panel discussion at the ESC congress 2013 this study was praised for its logistical complexity, involving a double-blind, triple-dummy set up, in which the sponsor was also blinded. It was emphasised that this is a short term outcome study. Platelet inhibition appears crucial in the acute phase, but the long term management might we different. This trial teaches us that the limit has been reached: more potent anticoagulants increase the bleeding rate. This calls for considering of other pathways, not anticoagulation, not antiplatelet, because there is still room for improvement in the situation of the patients.
Furthermore it was noted that this study teaches again that one has to be careful with the interpretation of small-scale studies; results are often not confirmed in large studies. 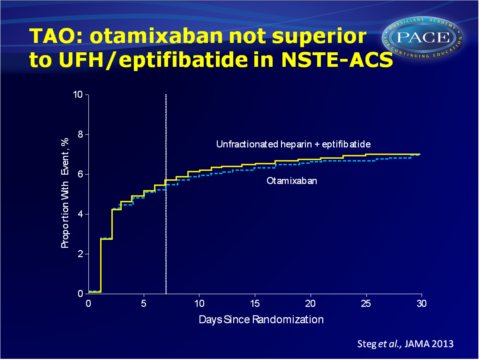