Many smokers use electronic cigarettes (e-cigarettes) to try and quit smoking, although the place of e-cigarettes in tobacco control is controversial [1,2]. Evidence suggests that e-cigarettes have the potential to help smokers in quitting or reducing to smoke, and that they can deliver nicotine into the blood stream, thereby attenuating tobacco withdrawal as effectively as nicotine replacement therapy (NRT) [3,4]. However, a trial in 300 smokers unwilling to quit only showed low rates of cessation after 12 months of use of nicotine and placebo e-cigarettes [5]. Furthermore, toxins have been detected in e-cigarette fluid and vapour [6], although at the about the same concentration as with NRT, and lower than in cigarette smoke.
This randomised trial was set up to assess whether e-cigarettes with cartridges containing nicotine were more effective for smoking cessation than nicotine patches, and included a blind comparison with e-cigarettes containing no nicotine (placebo e-cigarette). 657 People who wanted to quit smoking were randomised to nicotine e-cigarettes, patches or placebo e-cigarettes  in a 4:4:1 ratio. 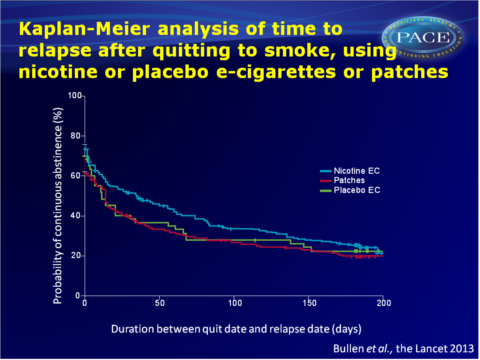