Similar resources required for management of major bleeds on dabigatran as on warfarin, with better outcome on dabigatran

Dabigatran etexilate has been approved in over 80 countries for stroke prevention in atrial fibrillation, based on the results of the RELY trial [1]. Major bleeding frequency at the highest dose (150 mg) was similar to warfarin and at the lower dose (110 mg) it was less frequent as compared to warfarin. A lower bleeding rate was seen with dabigatran 150 mg twice daily as compared to warfarin (INR: 2.0-3.0) in patients with venous thromboembolism (VTE) [2].
Most vitamin K antagonists have a long half-life, but their anticoagulant effects can be reversed within 10-20 minutes by prothrombin complex concentrates (PCCs) and within 6-12 hours by vitamin K [3]. No antidote exists for dabigatran, but it has a half-life of 12-14 hours [4] and withholding the drug for 1-2 days is sufficient to restore haemostasis in most cases of mild to moderate bleeding. In more life-threatening cases, more rapid restoration of haemostasis might be achieved by haemodialysis to remove the drug [5-7], activated charcoal to prevent gastrointestinal absorption of recently ingested drug [8] and the administration of PCCs [9], activated PCCs [10] or recombinant activated factor VII (fFVIIa) [11] to enhance thrombin generation. Evidence on the efficacy of these approaches is, however, limited.
In the absence of an effective antidote many clinicians are concerned that dabigatran-treated patients who experience major bleedings cannot be adequately managed. This study examined the management of major bleeding and outcomes after bleeding  in large phase III trials (RE-LY, RE-COVER, RE-COVER II, Re-MEDY and RE-SONATE) evaluating the efficacy and safety of long-term dabigatran, in comparison with warfarin. A total of 1121 major bleeding events (in 1034 patients) were analysed. 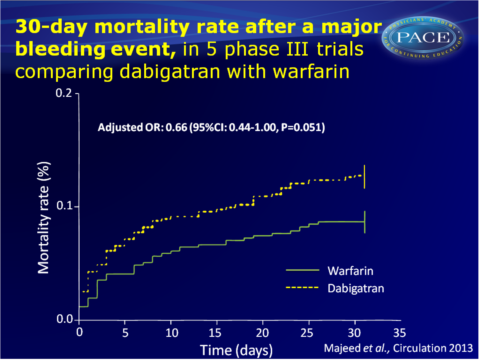