Periodontal disease (PD) is a common, independent risk factor for atherosclerotic disease [1,2]. Local periodontal inflammation, through pro-inflammatory cytokine release, has been proposed to lead to systemic inflammation, as measured by CRP, TNA-α, IL-6 and other biomarkers. This is one of the postulated pathogenic mechanisms linkin PD and cardiovascular (CV) disease [3-5]. Increased levels of circulating inflammatory mediators can then promote inflammatory activity within atherosclerotic plaques [6,7].
Local treatment of PD has been shown to reduce systemic inflammation in patients with a history of CV events [8]. No definitive evidence exists, however, that treatment of periodontal disease decreases CV disease progression or CV events.
18F-Flurodeoxyglucose positron emission tomography (FDG-PET) imaging provides a non-invasive measure of inflammation, also of inflammatory activity within atherosclerotic plaques. The authors have previously shown that periodontal inflammation correlates with carotid artery inflammation [9]. Others have recently demonstrated that periodontal FDG uptake correlates with PD severity as measured by alveolar bone loss [10].
Retrospective epidemiologic studies have shown that statin therapy is associated with reduced severity of periodontitis [11-14]. Furthermore, it was shown recently that a combination of statins and standard local periodontal treatment was more effective than the local treatment alone [15].
This double-blind, randomised, active-comparator study aimed to study the direct anti-inflammatory actions of statins in periodontal tissue, by using FDG-PET/CT imaging to test if high-dose atorvastatin treatment lowers periodontal disease activity, similar to its action on atherosclerotic plaque activity. 71 subjects completed the study, and for 59 of those periodontal tissue images were available. 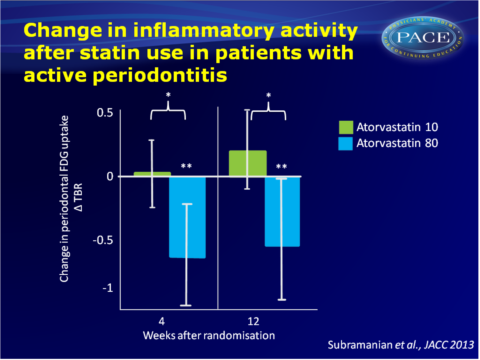 Twelve weeks of high-dose statin therapy significantly reduces periodontal inflammation. The reduction in PD activity was already seen after 4 weeks of atorvastatin treatment and correlated with changes in FDG uptake in the carotid wall.
It has previously been suggested that statins have effects beyond their lipid-lowering actions. This study provides evidence for a cholesterol-independent, or ‘pleiotropic’ effect of statins, namely reduction in non-arterial inflammation. The authors further postulate that a reduction in local periodontal inflammation may also exert beneficial effects on the systemic arterial milieu, through a reduced release of pro-inflammatory mediators from the periodontal tissue, into the systemic circulation.

Find this article in Pubmed