Combined Angiotensin Inhibition for the Treatment of Diabetic Nephropathy

Patients with diabetes and proteinuria are at high risk of developing end-stage renal disease (ESRD) [1]. Progression of proteinuric kidney disease may be inhibited by blockade of the renin-angiotensin system (RAAS)s [2-4]. The degree of reduction in proteinuria correlates with the slope of the decrease in the glomerular filtration rate (GFR) [1,5]. Therefore, it has been hypothesised that further lowering of proteinuria may reduce the risk of progression [5]. A larger decrease in proteinuria can be achieved with combination therapy with an angiotensin-converting-enzyme (ACE) inhibitor and a angiotensin II-receptor blocker (ARB), than with either monotherapy [6].
The Ongoing Telmisartan Alone and in Combination with Ramipril Global Endpoint Trial (ONTARGET) found no cardiovascular (CV) or renal benefits in patients at high CV risk , when comparing combination therapy with monotherapy. An increased risk of hyperkalemia and acute kidney injury requiring dialysis was seen [7,8].
The Veterans Affairs Nephropathy in Diabetes (VA NEPHRON-D) study was a double-blind randomised controlled study that compared the safety and efficacy of combination therapy with an ACE inhibitor and an ARB, and ARB monotherapy in slowing the progression of proteinuric diabetic nephropathy.

-- The trial was prematurely stopped (after a median follow-up of 2.2 years) as recommended by the data and safety monitoring committee, as a result of safety concerns due to increased rates of serious adverse events such as hyperkalemia and acute kidney injury, in the combination therapy group, in comparison to the monotherapy group, and little evidence for an effect on the primary endpoint.-- 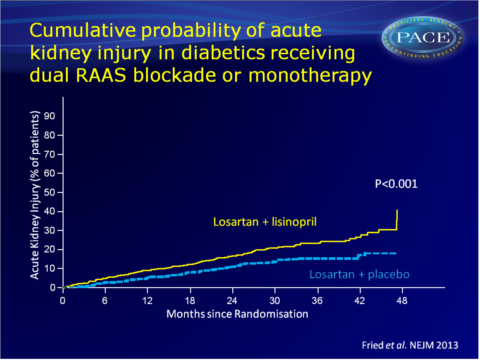 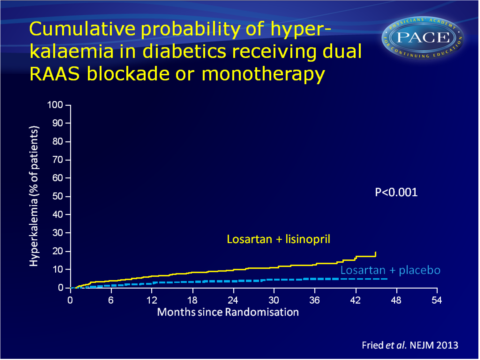 Combination therapy with an ACE inhibitor and an ARB, as compared with therapy with an ARB alone, was associated with a higher risk of serious adverse events, mostly acute kidney injury and hyperkalaemia. Combination therapy did not give a significant benefit with respect to progression of renal disease or death. Conditional power calculations suggested that no statistically significant benefit would have been achieved if the study were completed as planned.

It has been hypothesised that blocking more than one step in the RAAS would better yield better organ protection, since monotherapy gives incompletely RAAS blockade. Indeed, further lowering of blood pressure and albuminuria have been observed with different dual RAAS blockade strategies and clinicians have started using dual RAAS blockade. However, hard-outcome trials should guide decisions to use dual RAAS blockade. In addition to ONTARGET and ALTITUDE, VA-NEPHRON-D now demonstrated that dual therapy does not decrease CV and renal morbidity, but also that it is associated with increased risk.
The conclusion of these trials goes beyond the decision not to use dual RAAS blockade in diabetic patients. The results also demonstrate that an improvement of surrogate markers like blood pressure and albuminuria does not translate into risk reduction, because in contrast to the monotherapy studies, the protective effects do no longer outweigh the extra risk.