Added Sugar Intake and Cardiovascular Diseases Mortality Among US Adults

Average consumption of added sugar, including sugar added in processing or preparing food, increased from 235 calories per day in 1977-1978 to 318 calories per day in 1994-1996 [1]. Between 1999-2000 and 2007-2008, the absolute and percentage of daily calories derived from sugars declined, but consumption remained high [2]. The Institute of Medicine recommends that consumption of added sugar does not exceed 25% of total calories [3], while the World Health Organization recommends less than 10% [4].
Evidence exists that individuals who consume higher amounts of added sugar, especially sugar-sweetened beverages, tend to gain more weight and have a higher risk of cardiovascular disease [5,6] and associated risk factors. No studies have investigated total added sugar, in nationally representative samples. This study examines time trends of consumption of added sugar as percentage of total daily calories using a series of national representative samples. The association of this consumption with CVD mortality was investigated in the prospective National Health and Nutrition Examination Survey (NHANES) cohort [7,8]. 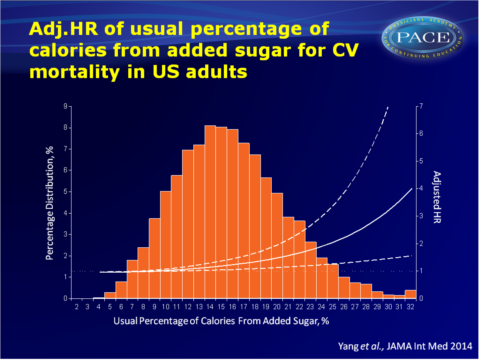 The vast majority of American adults derived at least 10% of their total calorie-intake from added sugar, and for about 10% of adults this percentage was at least 25%. Thus, sugar consumption of most adults is more than what is recommended for a healthy diet. Increased consumption of calories from added sugar is associated with increased risk of CVD mortality.
Correction for HEI score and its individual components suggests that the association between added sugar intake and CVD mortality was not explained by overall diet quality. Regular consumption of sugar-sweetened beverages is, however, associated with increased CVD mortality risk. These results underscore current recommendations to limit the intake of calories from added sugars.

We are in the midst of a paradigm shift: while overconsumption of sugars was previously assumed to reflect an unhealthy diet or obesity, sugar overconsumption is now seen as an independent risk factor in CVD and other chronic diseases. Indeed this study suggests that at levels of consumption common among Americans, added sugar is a significant risk factor for CVD mortality above and beyond its role as empty calories leading to weight gain and obesity. However, in contrast to sodium, trans fats, and other dietary additives used to increase the palatability and shelf life of processed foods, the US government provides no dietary limit for added sugar. This study underscores the appropriateness of evidence-based sugar regulations, specifically, taxation of sugar-sweetened beverages. This study furthermore documents rates of heavy sugar consumption among blacks nearly double those of whites, reaffirming the need for a national strategy to address inequities in food access.